There were many incredible women who supported the war effort. Mary Ellis was one of many women who flew with the Air Transport Auxiliary. In honour of Woman’s History Month, here is Mary Ellis’ story so you can share it with your children. 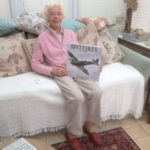 I’m Mary Ellis and I made it to the grand old age of 101!  I even flew a Spitfire when I was 99! During the war I was one of the women in the Air Transport Auxiliary (ATA). We moved aircraft around airfields, brand new out of the factories most of the time.

I first went in an aircraft when I was 10, I think. It was marvellous! I loved every moment! I can still remember the feeling of the wind rushing through my hair for the first time and how the ground looked from so high up, like a patchwork blanket of fields and roads. When I got a bit older, 12ish, they realised that I was really not very good at hockey, so the school actually let me have flying lessons instead! That was rather wonderful. I had got my pilots’ licence by the age of 17.

Well, then the war broke out and civilian flying stopped. I thought that was it, I didn’t think I would ever be able to fly again. I turned my attentions back to the animals on our family farm and tried to avoid the tea parties and tennis games my mother was constantly trying to drag me to.

And then, one day, a voice came on the radio “…are you a qualified female pilot? The Air Transport Auxiliary need you to help with the war effort. Don’t delay, apply today!”

I think I really did jump for joy! My mum said she shouldn’t think it was a good idea, but I signed up anyway. This was my chance to really contribute to the war effort and I wasn’t going to let a few little tennis parties get in my way!

Oh, it was all so exciting. To begin with, we spent the days flying really low, learning as much of the countryside as possible, I could see the leaves on the trees and the hairs on the backs of the cows. This was really important because we would have to navigate completely on our own just using our knowledge of Great Britain. There wasn’t even a radio on board so we couldn’t talk to the ground at all. Completely on our own! Our job was to deliver the aircraft safely, so we could land wherever we liked. When flying conditions were bad, we were to land the aircraft and wait until we were clear to fly again.

I really loved my time in the ATA. We had so many adventures! Flying without a radio was a challenge, half the time the bases had no idea we were delivering an aircraft so we just had to fit in, you know, fall in with the other aircraft circling the base and land when you could!

I had a bit of a near miss one day, I had just landed my spitfire and was hurtling down the runway when I looked up, to my surprise there was another Spitfire tearing towards me! Without a moment to lose I quickly turned my rudder, hoping the other Spitfire wasn’t going to turn in the same direction, our wings only a hair width apart! It was a miracle we survived. Well, it turned out that the other pilot was also in the ATA, we had completely missed each other when circling the runway and landed from opposite directions!

Having a woman in the air was a real shock for the RAF Airman I think, women had very few work opportunities before the war. A woman at university was almost unheard of, and now the ATA was paying men and women equally to do the same job! Once I was delivering this magnificent, medium weight bombing aircraft called a Wellington to an airfield. I had elegantly breezed down the runway, taxied around half the airfield following the escort van, unclipped my parachute, adjusted my hair and jumped gingerly out of the sizable aircraft to be greeted by a rather large herd of RAF personnel. Well, they obviously did not have anything better to do with themselves than stand and stare like gormless goldfish! I asked very nicely to be taken to get my chitty signed

“Yeah, just a minute miss, were waiting for the pilot” was the response I got. I blinked.

“I am the pilot” I replied! Well they didn’t believe me. They actually had the nerve to search the Wellington looking for a man that I was hiding on board! I think they were in awe; it takes at least 5 men to fly a Wellington but I did it all by myself!

Spitfires were my favourite to fly, they did exactly what they were asked with no questions. We were only told to get the aircraft to the base safely, we could land wherever we liked, and we had no time restrictions. I would chase the clouds, breaking the cotton wool fluff with my nose, causing them to scatter and giggling with delight! The aircraft looped the loop and flew upside down; I loved the feeling of the blood rushing to my head. If I was flying near a friend’s house, I would fly really low and make my tail wiggle to say hi. Cor we had some fun! The freedom was like nothing else.

Once, when I was in the air, I looked to my left and there was an aircraft with a distinctive Swastika marked on the side and I saw the pilot give me a cheeky grin. That was a shock! I had no guns to attack him and I couldn’t tell anyone he was here, but man did I want to wipe the grin off his face! Without really having time to think I frantically flapped my hands at him and told him firmly to go home! But he just kept looking at me with that silly grin on his face. It was my blond curls he liked I think; I never did wear a helmet, it really did nothing for my hairstyle.

Of course, it wasn’t all fun and games. I came back to my billets one day to find a rather sombre atmosphere, my friend in the next dormitory hadn’t come back. The weather that day had been bad, low clouds, rain and high winds; she had been lost amongst the rubble when her aircraft crashed into a hill. It was a sobering moment indeed. Our CEO told us not to fly for two days, that is all we got- the war wasn’t waiting for anybody.

You know there was times I didn’t want the war to end. I had my dream job! But of course, we were always on the look out for future employment- desperate not to leave the freedom of the skies behind. I was lucky, in the end I was approached by a farmer to be his personal pilot. Eventually I, Mary Ellis, became manager to an entire airfield on the Isle of Wight. That’s where I met my husband and spent the last of my days, in my house by next to the airfield.

Our Digital Archive holds the stories of lots of incredible women during World War II, including an oral biography from Mary Ellis, click here to discover more .

Are you interested in visiting the centre with your school? Find out more about our varied and inclusive education offer here.