There was the start of the forest, but in between was open ground covered in snow.  Thirty-two pairs of feet had left the exit to ‘Tunnel Harry’ and made the dash to the woods, when it was Bernard’s turn.

A miscalculation meant the tunnel exit had come up short by about ten feet, and was just beyond the perimeter fence.  Bernard was the thirty- third person to leave the tunnel, and at the age of fifty-six, the oldest of the seventy-six that would escape that night, in what became known as ‘The Great Escape’.

Bernard was born in Bourne End Bucks in December 1887, and between 1903 and the start of the First World War, he served as a sapper in the 2nd Gloucestershire Royal Engineer Volunteers, the London Electrical Engineers and finally in the TA with the Royal East Kent Yeomanry.

This all took place whilst studying at Clifton College Bristol and reading Theology at Trinity College Cambridge.

On the 24th June 1914 he was commissioned as a 2nd Lieutenant in Buckinghamshire Battalion of the Oxfordshire and Buckinghamshire Light Infantry.  By 1915 he was serving in France and Belgium, when he was wounded by a German rifle grenade fragment at Ploogsteert and was sent back to England to recuperate.  On his return to France, he was promoted and seconded to different Machine Group Corps.

In 1916 he attended various Lewis and Vickers Gun courses both in France and England, where he met Johnny Dodge, who many years later, would also become a POW at Stalag Luft 3, and a fellow escaper.  On the first day of the Battle for the Somme, he was promoted to Captain, but again had to return to England to attended a course, and whilst home on his 29th birthday, he married Kathleen Dorothea Connell.

At the beginning of 1917 he was Mentioned in Dispatches for action at the Somme and then fought at Passchendaele.  By 1918 he had further promotion to Major and the award of a Military Cross in the King’s Birthday Honours List.  In October, just one month before the Armistice, he was severely wounded in his heel, from either a bullet or shrapnel.

He returned to England for recovery and was given £120 compensation for his injuries.

After the war, Bernard and his wife started a family, his son was born in 1919, followed by a daughter in 1921.  He worked at the family Paper Mill which he ran with his Brother-in-Law.  He fulfilled many roles including Managing Director and Senior Sales Representative, which gave him the chance to travel through Europe sourcing raw materials.

With the Second World War looming, in December 1939 Bernard joined the RAF Volunteer Reserve, he was 52 years old.  He attended the Air Gunnery Course at RAF Aldergrove and was awarded his brevet.  Following this he was posted to No 44 Sqn flying the Hampden out of RAF Waddington, with the rank of Pilot Officer on Probation. 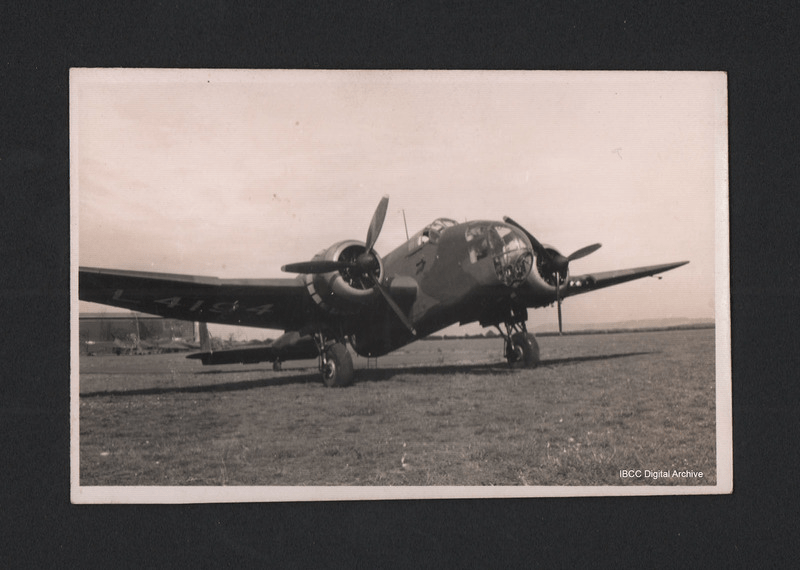 On the 20th July 1940, Bernard was on his first mission, which was a ‘Gardening’ sortie to Frederikshavn, basically laying sea mines which had the codeword ‘Vegetables’, in the busy shipping lanes.  The four-man crew consisted of the pilot Sgt Edward Farrands, Sgt Percy Nixon the observer, Sgt Reg Miller the second air gunner, plus Bernard in the rear turret.  Their Hampden L4087 took a direct hit from flax, which was protecting the port of Frederikshavn.  Edward announced he would have to ditch in Tannis Bay, as a fire was spreading across one of the wings, and sections of it were falling from the aircraft.

The belly of the plane hit the sea and part of the starboard fuselage was torn away.  Bernard threw himself through the hole and surfaced next to the sinking plane.  Floating next to him was the dead body of Sgt Nixon, whose neck appeared broken by the force of the impact.  Bernard was a strong swimmer and swam towards the roaring surf that was breaking against the shoreline and dragged himself onto the beach.  Within a few hours he would find himself in a Police Station at Skagen in Denmark, where he was handed over to the Germans and would spend the rest of the war as a prisoner.

Bernard was taken by train to Dulag Luft near Frankfurt am Main.  This was a reception camp before prisoners were transferred elsewhere.   It was here he heard the news that Sgt Farrands had survived the crash, but like Bernard, he was caught by the Danish Police, having broken into a summer villa.  The bodies of Nixon and Miller were washed up on the beach and they were buried in the cemetery at Skagen.

Between 1941-1942 Bernard found himself promoted twice, eventually obtaining the rank of Flight Lieutenant.  He was subject to various transfers between POW camps, including Stalag Luft II in Littmannstadt Poland, Stalag Luft I Barth Germany, a short visit to Stalag Luft III near Sagan and then Offlag XXI B, Schubin Poland.

He carried special pouches down his trouser legs, and walked around the compound dispersing earth that had been removed from the tunnel.

His escape on that cold winter’s night in March 1944 was short lived, he gathered with twelve other prisoners, all dressed as Czech workmen. They made their way to a railway station south of Sagan, boarded a train for about fifty miles, before alighting near Hirschberg.  As he approached a village he was forced to walk straight through the centre, because the surrounding fields were covered in deep snow, so he couldn’t bypass the village. He was captured by a German soldier and returned to Stalag Luft III, where he spent 14 days in the cooler.

Of the original seventy-six to escape, three managed to make ‘home runs’, one landed in England, two managed to seek refuge in Sweden.  On Hitler’s orders fifty of the escapees were executed, they were chosen from different nationalities to send a chilling message back to the camps.

By 1945 the Germans started to evacuate the POW camps in the East, as the Soviet Army advanced.  Bernard and the fellow inmates were forced marched, half starving and inadequately dressed in atrocious winter conditions, with heavy snowfalls and sub-zero temperatures, back into Germany.  Many suffered from exhaustion and exposure to the weather, and were shot by their captors where they fell.

They were finally liberated from a camp, on the 2nd May 1945 near Lübeck, by the 11th Armoured Division British Army.  On the 7th January 1947 Bernard was Mentioned in Despatches for his part in the Great Escape.

After the war Bernard remarried following the death of his first wife and ran a taxi business in Chichester.  In 1963 he attended the Premiere of ‘The Great Escape’ at the Odeon Leicester Square, to benefit the Royal Air Force Association and the RAF Escaping Society.