On the 7th March 1945 at 1708hrs, Lancaster PD268 of 101 Squadron lifted off from RAF Ludford Magna in the Lincolnshire Wolds. A total of 23 Lancasters would depart Ludford Magna that evening to support the raid. The target was the Junker’s Aircraft Factory at Dessau and they were part of a large bomber stream consisting of 526 Lancasters and 5 Mosquitoes. 18 Lancasters, which was 3.4 Percent of the force failed to return, including the crew of PD268. They were the only crew not to return safely to Ludford Magna in the early hours of the following morning, nothing was heard from them after taking off.

At the controls that evening was Sqn Ldr Montgomery Gibbon AFC and next to him, was WO Ivor Bond the Flight Engineer.  He would be assisting the pilot with fuel calculations, monitoring the engines and hydraulic pressures, and ready to carry out immediate action drills in the case of engine failure or fires. Down in the nose of the aircraft, Sgt William Canning the Bomb Aimer, would be busying himself checking his switch selections and bomb-sight, ready to direct the pilot onto the target as they approached Dessau.

Meanwhile the Navigator Fg Off Roy Gawthorp would be updating their track towards the target with the latest winds which he received from the Wireless Operator Sgt Leslie Tyrrell. All the time the Air Gunners Sgt Alfred Matthews and Sgt Charles Preston would be scanning the horizon for German Nightfighters trying to infiltrate the Bomber Stream. Seven would be the normal complement of a Lancaster, but this was an ABC Lancaster, also known by the codeword ‘Airborne Cigar’, so this carried an extra crew member.

Huddled over the glow coming from a Cathode Ray Tube was Plt Off Rudolph Mahr a Canadian from Winnipeg. Rudolph or ‘Rudy’, was a Russian Jew born in 1926, his Russian father was John and Anna his mother was from Germany. They left Russia and travelled to Canada arriving by ship in 1936 and took Canadian Citizenship. As the war progressed Rudolph wanted to prove what honourable Canadians they had become, so signed up with Royal Canadian Air Force and trained as an Air Gunner.

When 101 Squadron was earmarked as the ABC Squadron in 1943 a call went out for volunteers who spoke or understood German, Rudolph volunteered for the as of yet undisclosed role, that he would play on the Squadron.  His job on the Lancaster was the Special Duty Operator, the eighth man. The SD Operators came from all walks of life, some were German Jews like Hans Heinz Schwarz or George Kesten, who were born in Berlin, but fled their homeland and served in the RAF. Others were aircrew who had learnt some German at school, and volunteered for this new role. They all had to learn the codewords that the ground controllers would use with the Nightfighter pilots, as an example ‘Kapelle’ which meant Target Altitude.

So as Rudolph stared at his Cathode Ray Tube he was looking for a blip that would indicate a transmission. He would stop his receiver on the signal and listen to confirm it was a Luftwaffe ground to air frequency. Once confirmed he would activate one of three 50 Watt transmitters, bring it over the frequency and block the signal, thereby preventing the Luftwaffe ground controllers from communicating with their Nightfighters.  Often engine noise picked up by a microphone in one of the engines, would be played out as the jamming signal. The outside of the ABC Lancaster was dominated by three large aerials, two on the top of the fuselage, and one under the nose, these highlighted the specialist role of the aircraft. But the crew of PD268 were not alone, other Lancasters from 101 Squadron would also be dispersed in the Bomber Stream at 10 mile intervals, all using their jammers to mask the Luftwaffe air comms. So as the Bomber stream progressed the jamming umbrella would move along trying to protect the raid.

The ABC Lancaster not only provided a jamming capability, they were part of the raid plan, carrying a bomb load themselves. The load would be reduced because of the extra weight of the specialised equipment and the extra operator carried in the fuselage. In the case of PD268 the bombs would never reach the target, the importance of the activities of 101 Sqn was not lost on the Luftwaffe, which made every effort to locate and destroy the modified Lancasters.  A Nightfighter, the very thing they were trying to protect the stream from, managed to intercept them and attack the aircraft with cannon.  No wreckage or crew were found and it was assumed the aircraft had come down in the sea. The only place relatives could pay their respects was the Runnymede Memorial, which commemorates over 20,000 air force men and women, who lost their lives and have no known grave.

Horst Klötzer was a local historian and archaeologist who documented the crash sites of warplanes in the Westphalia district of Germany. In 2013 he followed up on reports of a crash site in a forest near the city of Hagen, and a survey of the site found widely scattered remains of an aircraft, some of these parts were very tiny, often less than two centimetres wide. Further excavation revealed some British coins, a compass pendant, part of a landing gear strut and various metal pieces with identification marks on them. There was also reports from local people who remembered the crash took place on the 7th March 1945 and that a body from the crash had been buried in an unmarked grave in the local cemetery. After painstaking investigation the final resting place of PD268 had been discovered. The cemetery had no records to support the burial of the airman and no further action by the authorities has taken place.

Horst Klötzer and his team used social media to try and find surviving relatives of the crew. In 2015 Ernest Mahr, the brother of Rudy, flew to Paris with his wife, hired a car and drove the 560 kilometres to the crash site at Hagen.  Ernest could finally pay his respects to his elder brother, who was just nineteen years old at the time of his death. 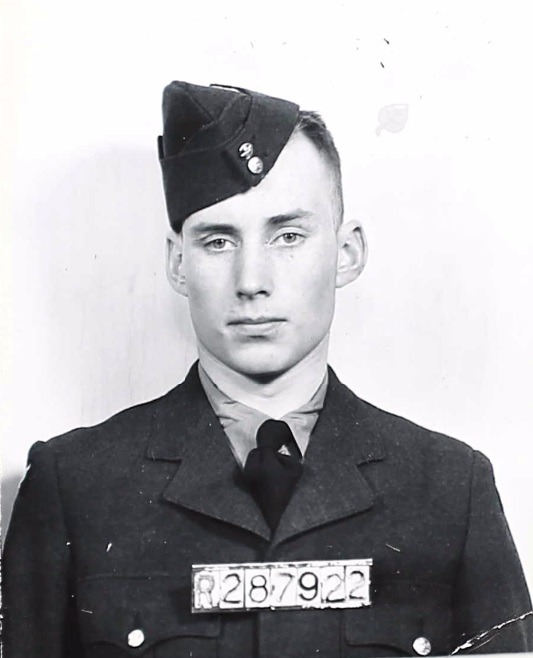 101 Sqn part of No1 Group had some of the largest losses in Bomber Command during WW2. Because of their specialist role not only did they fly missions with No1 Group, they also had to fly in support of other Groups.  Hence there was very little respite for the men of 101 Sqn. In total 1094 men were Killed In Action and 178 were taken Prisoners Of War.