At 19:15hrs on Sunday 16th August 1942 a No 44 (Rhodesia) Squadron Lancaster R5489 KM-G was returning to RAF Waddington after a four hour training flight. This was a familiarisation trip for the newly qualified Flight Engineer Sgt John ‘Jack’ Fletcher. The aircraft flown by Sgt Ron Easom was over Branston on the downwind leg of the circuit, when the inner starboard engine caught fire. He ordered Jack to feather the engine and operate the fire extinguisher. Unfortunately the Flight Engineer feathered the outer engine by mistake, causing the aircraft to yaw and stall, and it crashed into a pig sty, a shed and trees before finally coming to rest on the south side of the village behind a row of cottages called Mill Row on the Sleaford Road.

The aircraft broke in two, just behind the main spar and was instantly engulfed in flames. Frank Walshaw, the Wireless Operator had braced himself for the impact, but the radio transmitter broke from it’s mounting and hit him in the chest. He remembers being dragged from the wreckage and laid on the ground near the cottages, meanwhile the fuel tanks had ruptured and blazing fuel was all around the aircraft.

Some pigs were trapped under the wreckage and their squeals were horrifying to hear, as they were roasted alive. Ammunition was also exploding all around, when suddenly an elderly lady emerged from one of the cottages with a tray of teas, and said to Frank “You’ll be ready for a cup of tea Luv”.  Even with the inferno all around she wasn’t fazed and continued to dispense refreshments.

The rescuers were able to save all the crew apart from Sgt David Pullinger the New Zealand Bomb Aimer, who was dead in the nose of the aircraft. Sgt Jack Fletcher was also pulled from the aircraft, having first been catapulted against the instrument panel in the cockpit, then down into the nose, such was the force of the impact. Jack Fletcher died of his injuries during the night in Bracebridge Heath hospital. Two of the rescuers who pulled the crew from the wreckage were Fred Kirk, the local butcher, and Dick Taylor who farmed in Branston. With complete disregard for their own safety they pulled the crew out of the plane, that was likely to have exploded at any second.

In 2015 the land behind Mill Row had been earmarked for a housing development by Taylor Wimpey. Firstly, an archaeological survey using a metal detector was performed, this found various aluminium airframe fragments, internal copper alloy components, and various pieces of .303 ammunition. They also discovered pieces of clothing and buttons, but these were later identified as civilian clothes not associated with the crash, these were probably ‘shoddy’, which were old clothes ploughed into heavy soils to improve the texture.

Frank Walshaw presented a memorial plaque to the Branston Home Guard Social Club in 2002.  The plaque states that Frank was a survivor of the crash and a former resident of Branston. In the main bar there is a display case belonging to the Lincolnshire Aircraft Recovery Group, which displays a model of the Lancaster along with remnants recovered from the crash site.

The new housing estate is now nearing completion and at the Memorial Gardens in the centre of the estate, there is a Commemorative Stone which lists the crew and their rescuers. There is also a Memorial Bench dedicated to Sgt D Pullinger and Sgt J Fletcher, the two fatalities from the crash. The roads around the development have also be named in honour of the crew and rescuers, so Easom Way, Jack Fletcher Close, Fox Close, Pullinger Way, Walshaw Close, Berrigan Way, Black Court, Taylor Close and Kirk Road can all be found within the estate. 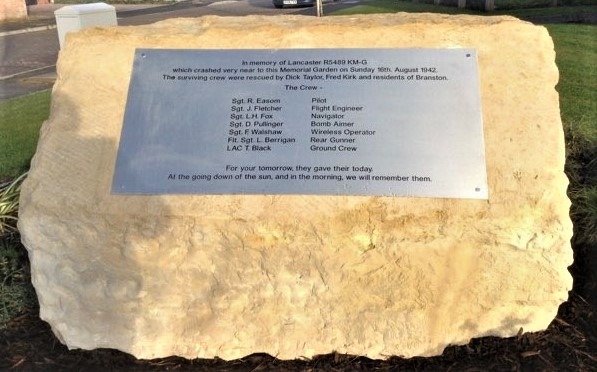 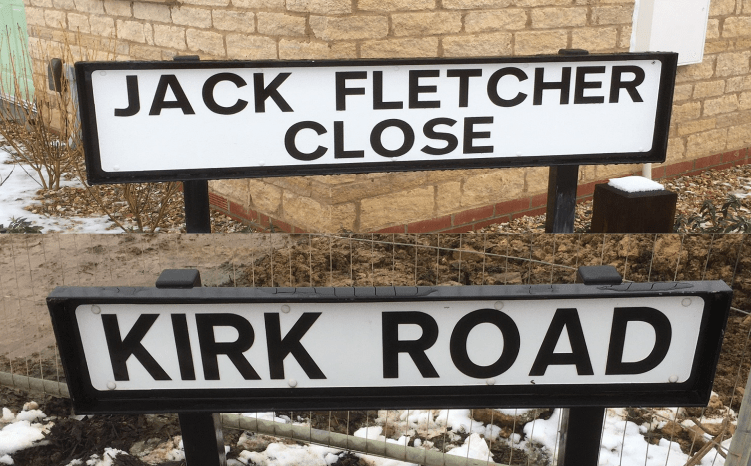 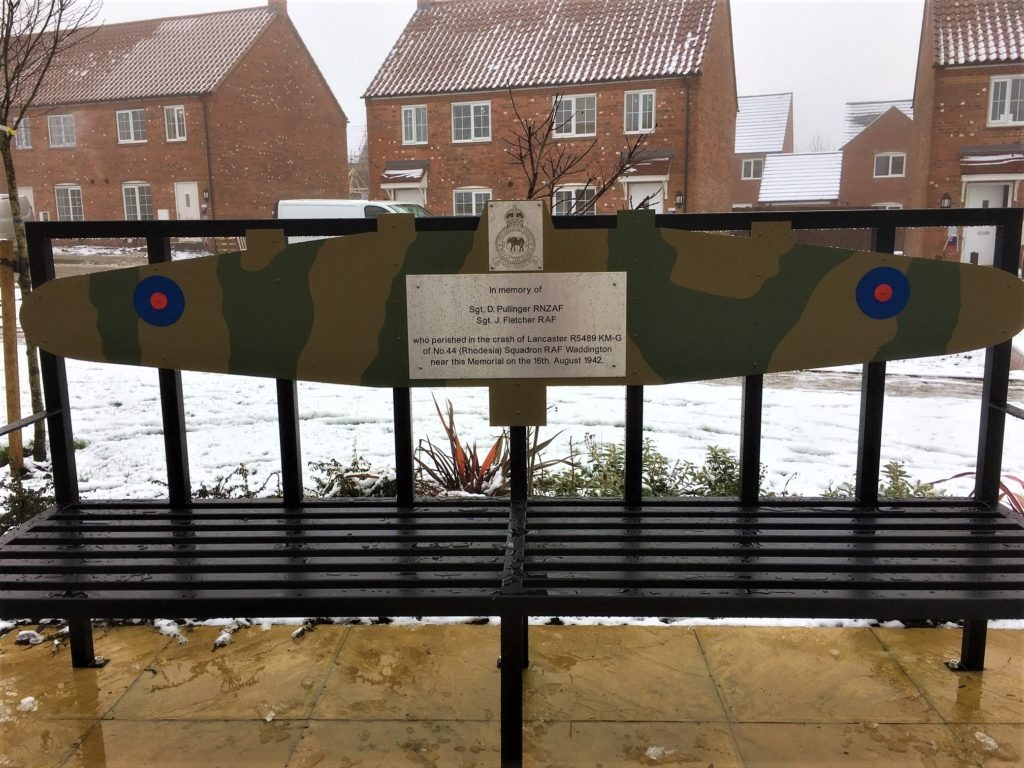