Lancaster LL639 of 514 Squadron was lost on an operation to Aachen on the 11th April 1944.  All the crew, with the exception of the Navigator, Eddie Humes, were lost.

The crew who lost their lives: 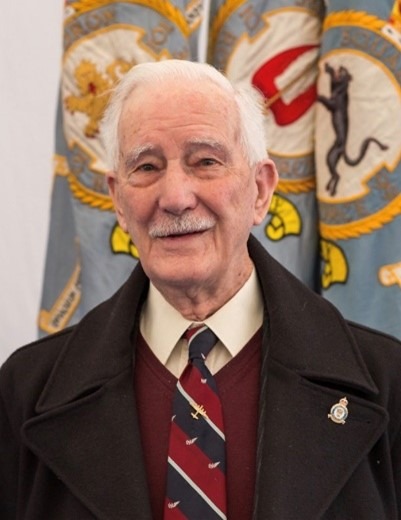 On the 11th April 1944, the crews target was Aachen, the westernmost city in Germany, located close to the Belgian and Dutch borders.  After carrying out their mission, the Lancaster was heading home to R.A.F. Waterbeach, Cambridgeshire when it was attacked, probably at around 23.15 hours, by a Messerschmitt BF 110 flown by Unteroffizier Hans Fischer of 12/NJG1.  The attack took place near Roermond, around 60km north of Aachen.

“The port outer engine caught fire and this soon spread along the port wing. Noel gave the order to prepare to abandon. This meant that all secret equipment had to be destroyed so as not to get into enemy hands and the gunners had to leave their turrets. Everyone except the pilot had to head to the escape hatches. We flew for a few more minutes as Clive tried to extinguish the blaze in the belief we would be able to continue on route home. The next thing that happened was that the port wing tip fell away followed by the port outer engine and the pilot could no longer keep control of the aircraft. The instruction ‘ABANDON AIRCRAFT’ was given. Reg, the rear gunner, reported his turret would not operate and Jock set off to try to help him accompanied by Clem. Jack had responded to the instruction and I headed towards the front escape hatch passing Clive, the flight engineer and Thack, the pilot who was still at the controls.  As I got to the escape hatch I was surprised to find it already open.  Jack’s parachute pack was still in its container but there was no sign of Jack.  It looked like Jack had exited the aircraft via the bomb bay escape hatch but had not had time to retrieve his parachute from his stowage in the aircraft.  His body was later found in a tree near to the crash site.  As I was about to abandon the aircraft I found my legs were trapped.  Not sure what to do I pulled the rip cord of the parachute, I felt an intense pain in my legs but to my relief the chute opened and pulled me clear of the aircraft.  I drifted towards the ground landing heavily with my uniform in tatters and bleeding profusely. My femur had been broken as I was pulled free from the plane. The remainder of the crew were unable to escape from the stricken aircraft. The crew who lost their lives are buried together in Heverlee War Cemetery, Brussels, Belgium.”

Eddie was taken to hospital in occupied Belgium, and then to a German military hospital where he underwent surgery and a long period of recuperation.  During his recuperation, the Germans informed Eddie and his fellow patients that if they signed a paper saying that they had been well treated, the guards and German military personnel would leave them in the hospital to await rescue by the now-advancing Allied Forces. The prisoners agreed to sign, but shortly afterwards the SS arrived at the hospital, tore up the papers and Eddie found himself being moved Eastwards through Germany and Poland until he arrived as a POW at Stalag Luft VII at Bankau near Kreuzberg in Silesia, now central Poland.  Eddie was evacuated from the prison camp on 2nd January 1945 and following ‘the long march’ he arrived in the American zone 6th May 1945.  He was repatriated 6th May 1945.

The 1st operational tour for the crew in late 1943 was to drop mines in the harbour of Biarritz.  They were due to complete this operation along with 10 other aircraft from 3 Group.  The crew found it unusual that they did not see any other planes either on their way or at the drop zone but completed their operation and started on the journey home.  As they crossed the English coast they were immediately picked up by searchlights and directed to the West finally landing at Exeter, many miles from their airfield at Waterbeach!  They finished their 1st op accompanied by an armed guard and a tongue lashing not knowing what they had done.  The resultant enquiry found 2 things.  1st they did not receive the ‘operation cancelled’ signal before crossing the coast on their outward leg and secondly the plane had been mistaken by the Observer Corps as a Wellington Bomber who had got lost on a training mission and broadcast a ‘May Day’ signal.  Apologies coming when the true story became clear.

23rd November 1943 was the second operation for the crew and their 1st to Germany – Berlin.  The outward journey went well, the bombs were dropped and the crew turned on course for home.  At this moment Thack, the Pilot, let out an horrendous cry.  An aircraft was turning immediately ahead of them and he had to manoeuvre to avoid crashing into friendly aircraft.  The aircraft shook and rolled due to being in the stream of the other planes whilst Eddie, the Navigator had to quickly make some adjustments to their course. Soon they saw the enemy coast and a short time afterwards the marvellous sight of the English coastline.  Their 1st operation to Germany completed.

Operations continued throughout December 1943 and January, February, and March 1944.

On 30th March, the crew operation was to Nuremberg. A terrifying night where large numbers of planes were shot out of the sky. Over 100 being victims of anti-aircraft fire and the relentless attacks by enemy fighters.

If you would like to commemorate a friend or loved one with a stone, please click here