Michael John Cook, was my great uncle, who sadly lost his life on a raid to Munich on the 17th December 1944.

Together with my father, Richard, my mother, Vanda, my uncle, Ernest, auntie, Kay and my wife, Rebecca, we put money together to have a Ribbon of Remembrance stone laid.

I have done some research into Michael and here is what I have found and what family have told me.

Michael was born in Purton, Wiltshire on the 24 January 1925 to Richard Owen Cook and Emily Cook, née Woolford. He was one of 6 Children: his brothers were Arthur, Anthony, Richard. His sisters were Mary and Dorothy . He was brought up in a little village called Meysey Hampton, just outside of Fairford.

He worked as a centre lathe turner operator in his civilian role. I believe like all young men of the time he wanted to be a Pilot, however he ended up being an Air Gunner, in the mid-upper turret on a Lancaster. 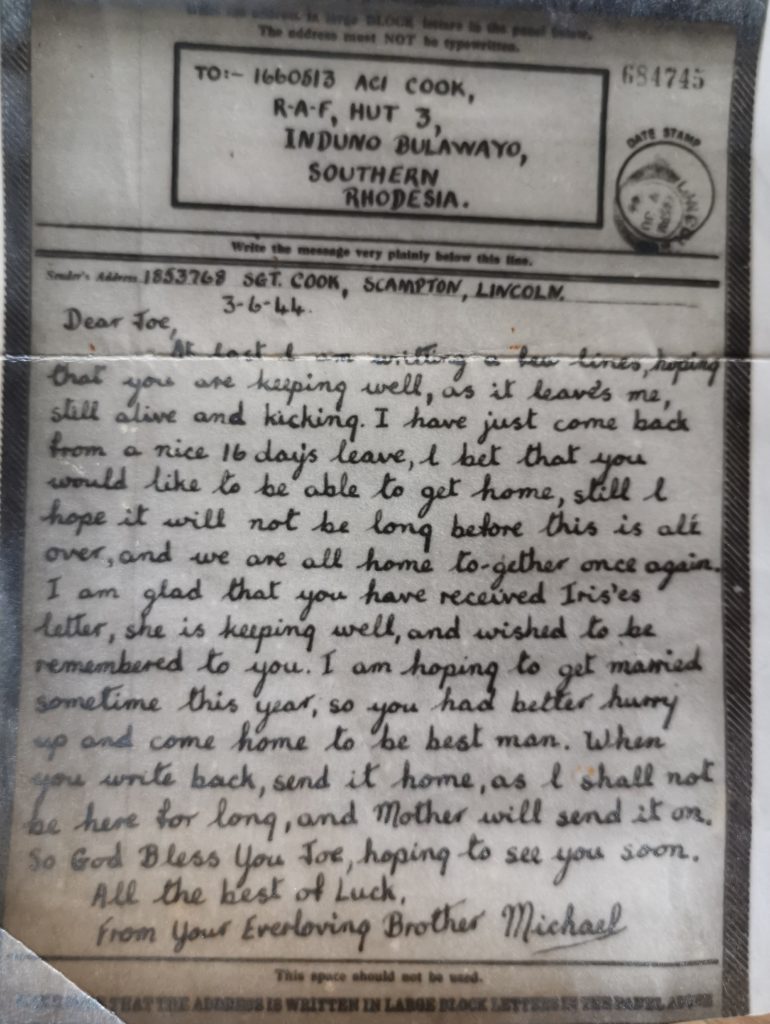 It wasn’t long before his 1st sortie, which was on the 14th August 1944. It was a daylight raid on Brest, up at 17:37, down at 22:18, carried out on a Mk 1 Lancaster. The crew was noted as the following. F/O Ronald Ernest Amey, Sergeant F Livesey, Sergeant J B Wilson, F/O F W Jack, F/S George William Lane, Sergeant C G Hutchinson. The details of the sortie follows, primary target attacked at 20:20hrs from 15,750. No cloud, good visibility. Target identified visually. Bombed with tanker in sights. Tanker squarely hit. Two sheets of flames. Bombing extremely accurate. Crew behaved very well for 1st trip. Monica Mk 3 and API carried. Un/g unmanned. Sortie complete. 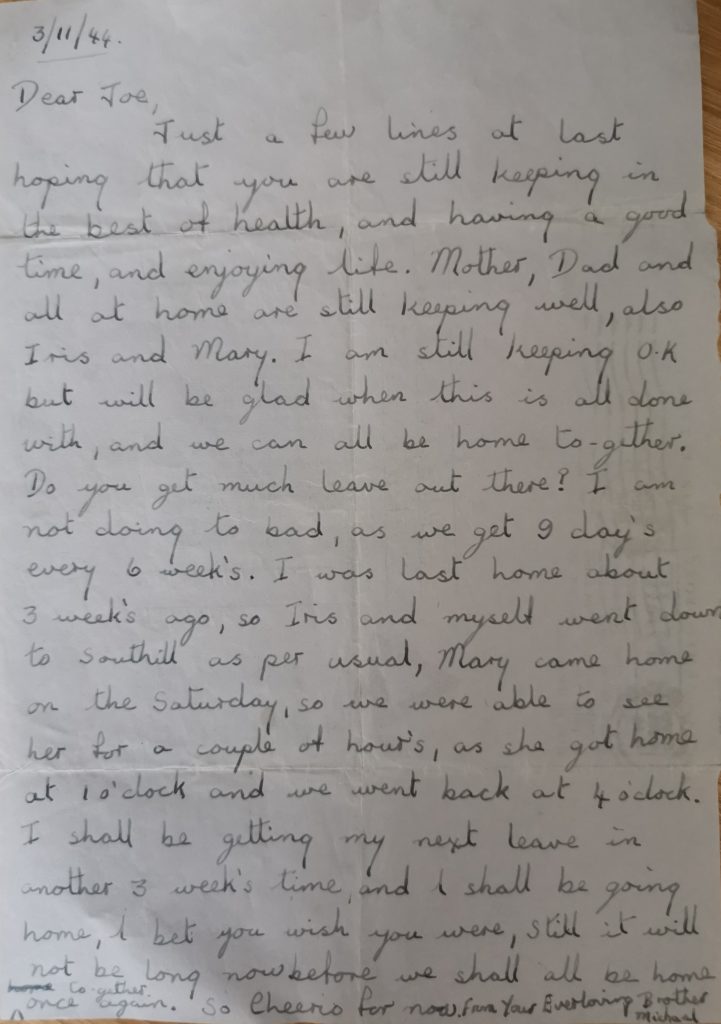 The next sorties went in this order :

A notable sortie is the sortie on Bremen on the 6/7th October 1944. The crew was the same as mentioned above, with an extra crew member of P/O R R Wonders. Up at 17:21 and down 21:50 – primary target attacked at 20:30hrs from 15,750ft. No cloud, visibility good. Target identified by T.I.G bombed on and overshot T.I.G by 26 seconds. Fires concentrated. Aircraft badly damaged by friendly incendiary bombs, four of which fell in the cockpit. API carried sortie complete.

I have been told by Michael’s only surviving sibling that he can remember Michael being home, with burnt hands and bad nerves. He also mentioned that the pilot called for bailout however the comms were not working for all members. Some of the crew did bailout. The pilot managed to get the aircraft back to England. The aircraft in mention is VN-W lm676. This aircraft was a Mk 3 and was the main aircraft that Michael and his crew flew in.

After this incident a few crew members changed. The crew appeared like this until the last faithful sortie:

The fateful sorties happened on the 17th of December, a sortie to Munich. Up 16:12 – aircraft missing. Loran.

All crew bar two were killed in the blast, believed to be cause by anti-aircraft fire.

Sergeant F Livesey and F/O Ronald Ernest Amey were ejected by the blast, Ronald sadly died of pneumonia on the 31st December 1944. I believe that Sgt. Livesey was made a prisoner of war.

Michael married Iris Edith Bryant on the 28th August 1944. In wick, near Bristol. Where his wife was from.

After the war Iris remarried. She had two children, a boy and a girl. Iris kept the death of Michael, a secret from the family. Notably her two children. They only found out their mother had been previously married, when they were clearing her home after she passed away. They found a wedding photo of their mother, torn in half, and wearing a different dress to the one she wore in her wedding to their father. They were told by a neighbour that their mother was a widow from the war. Not only this, but Iris named her son after Michael. Her son Michael didn’t know what his name meant to his mother until her passing. 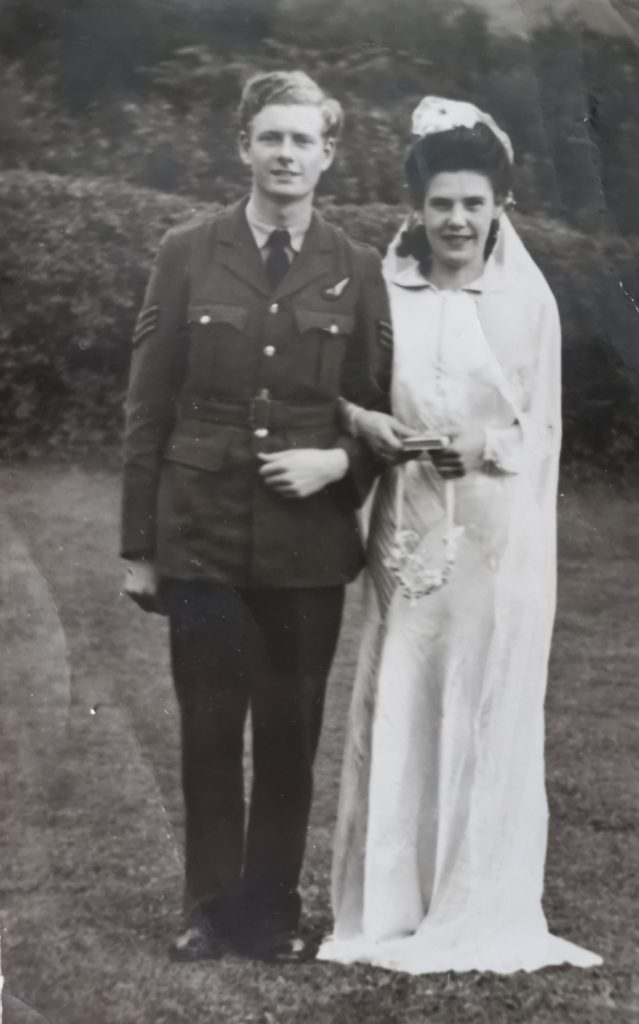 My family and I love coming to Lincolnshire, we live to visit East Kirkby, Skellingthorpe and the IBCC. Most of the Cook family are still in the local area to which Michael and his siblings all grew up.