On the 6th August 2021 approximately fifty relatives and friends gathered at the IBCC for the unveiling of the Nimrod Ribbon of Remembrance stone. The stone honours all those who served or supported the Nimrod Force and are no longer with us, but it especially recognises friends lost on three Nimrod accidents during it’s time in Service. Please click here for the background information on these accidents.

The short service was conducted by the IBCC Padre, the Revd Charles Thody, who by coincidence, had worked on the Nimrod whilst serving his apprenticeship at BAE Hatfield.

The unveiling was conducted by Mr Michael Bell, the brother of Gerard Bell who was killed on XV230. Michael is also well acquainted with the Nimrod, having flown as a Flight Engineer on the Fleet. Mrs Julie Matson also unveiled the Ribbon, as her husband was a well-liked and respected Chief Technician who served on 51 Sqn at nearby RAF Waddington, before his death following an illness.

A Roll of Honour was read out, before the Last Post and a Two Minute Silence was observed. Finally, a Wreath was laid in memory of all our friends. 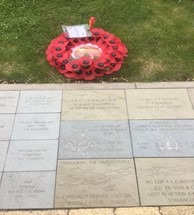