This is the story told by the younger sister and a niece of a Bomber Command Navigator, who like all the brave Bomber Command colleagues have only just, 75 years on, started to be recognised for the ultimate sacrifice they made.

Our crew (as we always refer to them), like many bomber crews, were made up of seven men with different skills, we understand they chose each other as a crew and that personal chemistry was the deciding factor in their working together. We believe they met at Desborough in Northamptonshire in July 1944 where they started their heavy bomber training on Wellingtons.

We are lucky enough to have the letters sent home from Stradishall in Suffolk where they were based as part of Number 3 Group with 186 Squadron, from November 1944 until April 1945. These letters tell a story of a close crew who shared chocolate cake sent by Jacks mother for them, along with spam and pickle sandwiches on the train back to their base. It would seem that Jack and his friend Freddie, would meet at Piccadilly station in Manchester and Harold would join them at Stockport en-route to Stradishall, after returning from leave.

The letters go on to tell, how Charles was sending a parcel home for his baby daughter, how Mick was being given leave to collect his older brothers MC, how they had their picture taken under the wings of their Lancaster, that they had at last got their own ‘plane and so were a happy crew again. 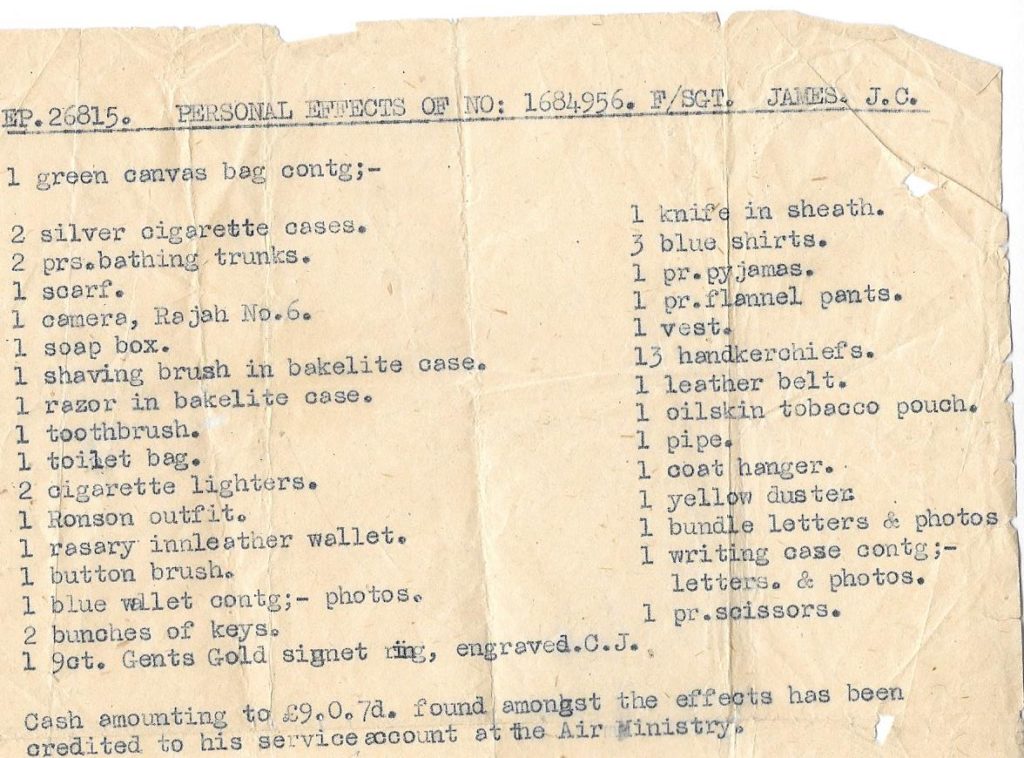 Their bombing raids were mainly in daytime over Germany to Kamen, Cologne, Dortmund, Datteln, Munster and Hamm. Their only night time raid was on the Friday 13 April 1945 to Kiel, and it was this mission on the return journey home where our crew all lost their lives, just as they were about to land back at base.  Sadly, two Lancasters (YPB 488 and YPB 483) were called in to land at the same time – resulting in a fatal crash in the early hours of the 14th April 1945. 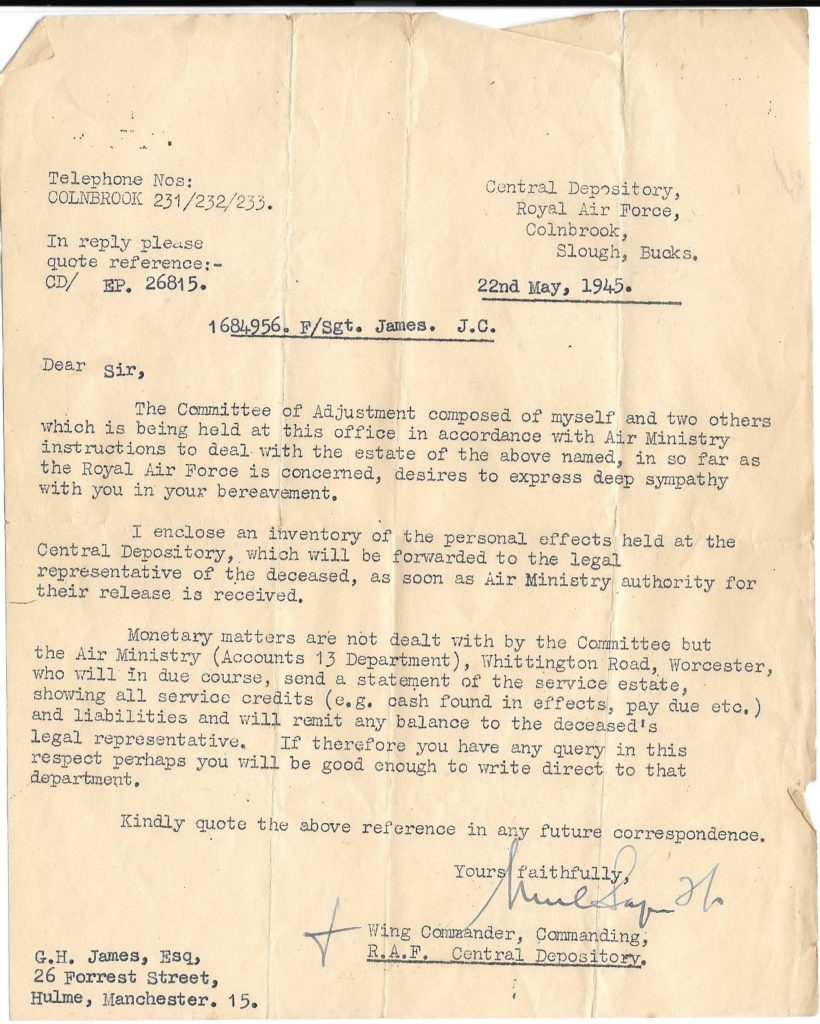 The event is remembered well and noted by the late Philip Gray, a pilot at Stradishall, on that fateful day, his book Ghosts of Targets Past (1995), he goes on to say ” throughout the night and all of the following day the clean-up continued. 10 bodies were found, and there were three survivors”.

So the story continued, some 65 years on when we found the letters by chance in 2010, amongst them, some from the parents to other crew members’ families about their terrible loss of much loved sons, brothers and fathers, so close to the end of the war. 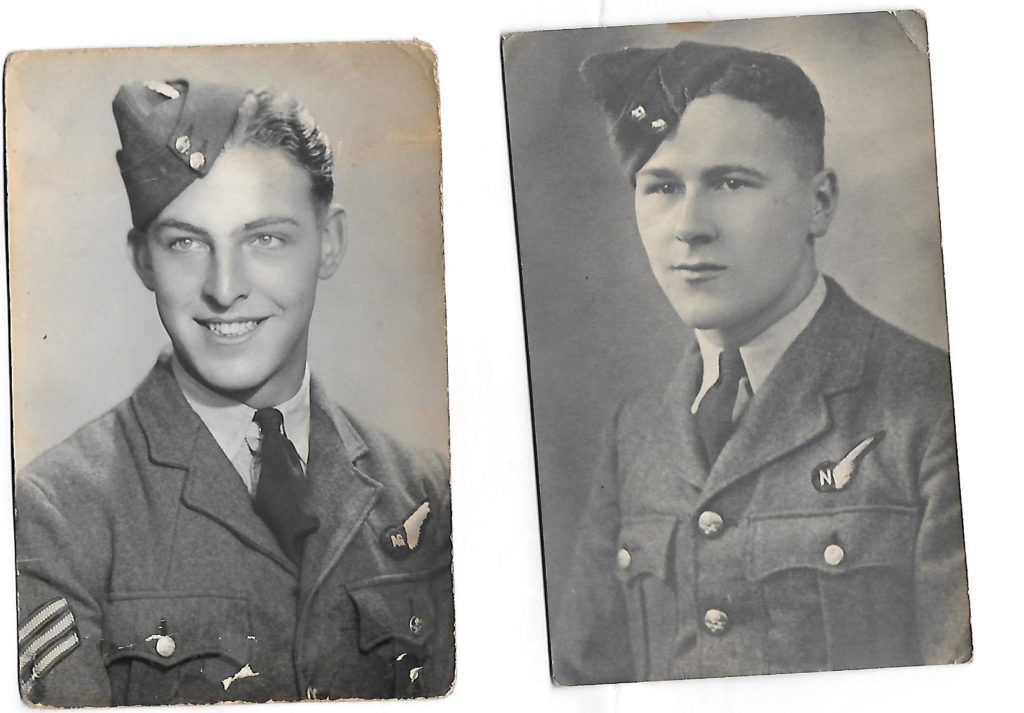 This resulted in us wanting to know more about these men and their lives as a bomber crew and resulted in a visit to Stradishall to meet a very special gentleman, Jock Whitehouse who has worked tirelessly over the years to keep the memory of 186 Squadron alive, and who gave us vital information about the collision, he even gave us a piece of the Lancaster (PB 488) they had flown in that had been retrieved over 40 years later from the field they crashed in. Of course we had to make a visit to the former base, and then went onto the local village church St Margaret’s where a rose was planted in their memory, we are told it flowered the year after being planted.

More recently, hearing of the launch of the long overdue International Bomber Command Centre, there were discussions about ordering a memorial stone for a much loved brother and uncle as part of the ‘Ribbon of Remembrance’ initiative. Then, the Navigator’s little sister, who was then 82 said, ‘’Jack would not like that, look at the letters again, they were a crew and they each deserve a special memory, they lived and died together’’.  More research has revealed that some of the crew, have no surviving relatives, and so a memorial stone has been ordered for each of them, and a request that they are placed next to each other as a team, just as they were in 1945.

To remember a loved one in the Ribbon of Remembrance, please click here