Skip to content
HomeThe Last Flight
The last flight is the story of Avro Lancaster LM621 (HW-C) of 100 Sqn. Sent in by Mark Hanson
At 21:00 on 30th June 1944, Pilot Officer Bill Kay and his crew took off from RAF Grimsby (Waltham) to attack the railyards at Vierzon. This was a major junction for German reinforcements heading for Normandy to counter attack the invasion. It never got there. About 40 miles from the target near Vouzon it was attacked by a night fighter, possibly Rudolf Morenz (5./NJG 2) in a Ju88 with upward firing cannon called Schrage Music. A fire was started in the port wing and quickly moved to the fuselage. Bill gave the order to bail out. The Flight Engineer, Sgt Harry Dale (my Grandad), stayed with the pilot. He helped Bill out of his seat and they both jumped. The last to jump was the Wireless Operator, Ernie Harrop, surrounded by fire.
The mid-upper gunner, John Sharpley, had just returned to the crew after being given a few days leave. He had met his best mate in Ormskirk, who was on leave from the Navy called Hearn. At the end of the meeting, Hearn cheerily said “see you in three months”. Ominously, John replied “I’ll be dead by then”. Unfortunately, he was right. He was severely injured in the attack. It is unknown whether he managed to jump or went down with the aircraft, but villagers found him and helped him, but unfortunately to no avail. John died of his injuries just a few days after his fateful words. He is buried in Vouzon Communal Cemetery in Military Plot 1. The only military casualty in the cemetery. 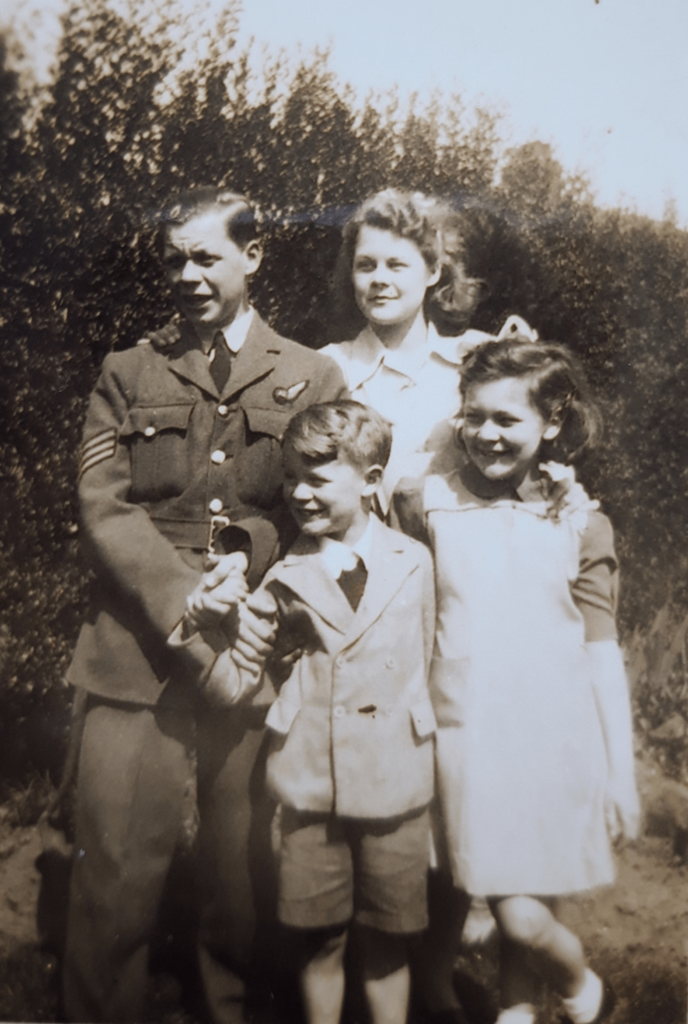 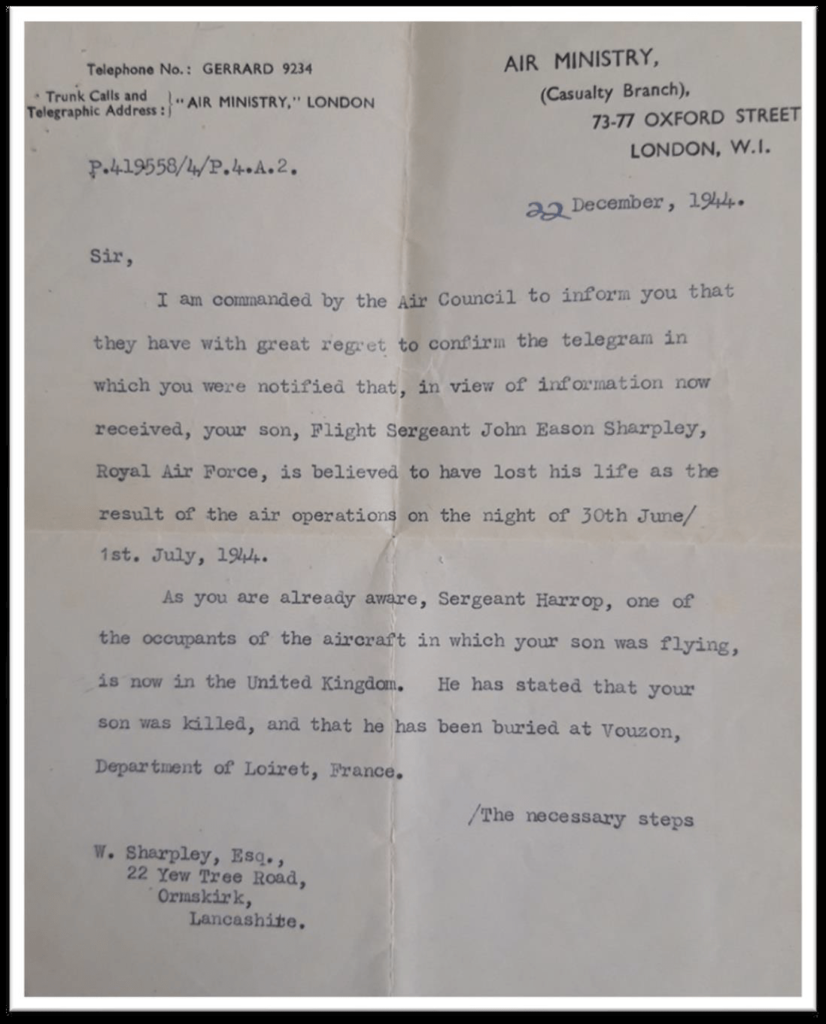 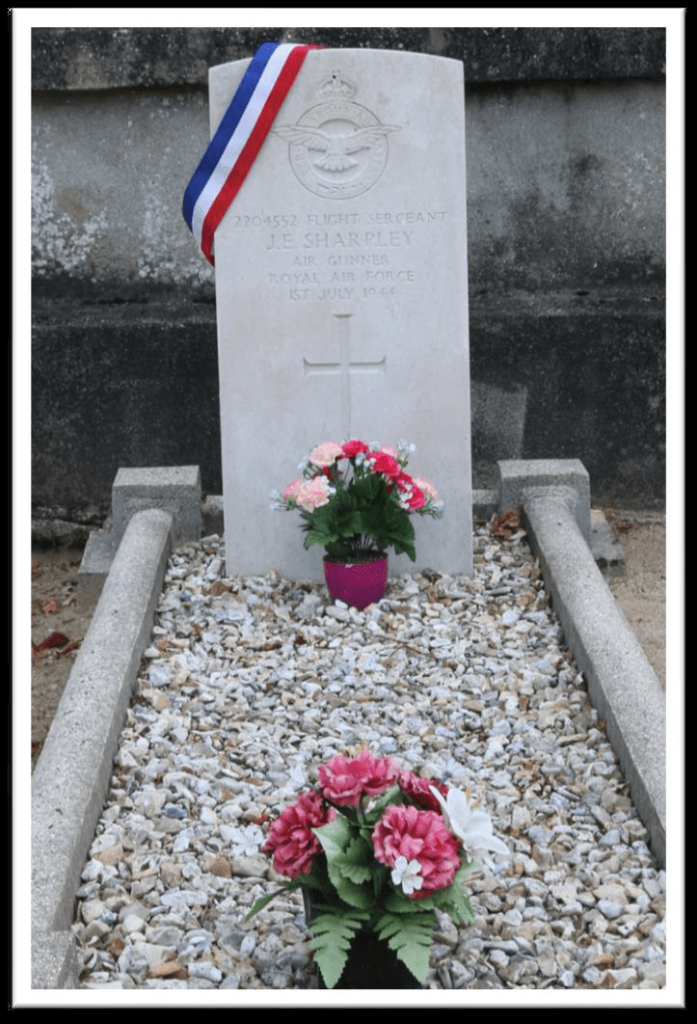 Of the six that managed to survive the crash, Dale was captured the next day near Orleans. Harrop had injured himself in the landing and was hidden by the locals in a hut in the woods. During this time he was brought part of the scalp of John, where he identified his crewmate. After 5 days in the hut, he moved into a farmhouse and stayed there until 17th August when he developed appendicitis. He was rushed to Allied lines, operated on, and transported back to the UK.
The other four were picked up by the Resistance over the next few days and transported to the Maquis resistance HQ where they stayed until 11th July. They asked to be involved in the sabotage operations, but were refused. On the 11th July they decided to head off and find their way home. The rear gunner Bill Struck and bomb aimer, Jimmy Frink decided to head towards Normandy. Bill Kay and navigator, Fred Fulsher headed toward Paris.
Struck and Frink managed to reach Le Mans where they split up, Frink meeting up with the Allies soon after. He begged to be allowed to go back to Le Mans and get Struck, but was refused. Struck was picked up later and the two were reunited.
Kay and Fulsher reached Paris with the help of the resistance. On 19th July they were taken out of Paris, but were betrayed by a double agent (possibly Jaques Desoubrie), and handed over to the Gestapo. They were interned in Fresnes Prison along with 166 other airmen. The Gestapo labelled them “Terrorfliegers” – Terror Flyers, and were not treated as Prisoners of War. On 15th August, the 168 airmen were transported in overcrowded cattle trains to Buchenwald Concentration Camp. They would become known as the “Lost Airmen of Buchenwald”. They identified Squadron Leader Phil Lamason as their senior commander and behaved like the military they were, which seriously upset the camp guards. They managed to sneak a letter out of the camp to the local Luftwaffe office detailing their fate. This letter went up to the highest levels of the Luftwaffe. The Luftwaffe were furious that airmen had been treated like this and ordered their release. Unfortunately 2 airmen, one RAF and one USAAF died in Buchenwald due to sickness. The other 166, including the two from this aircraft, were released on 21st October into the care of the Luftwaffe, three days before they were due to be executed by the Gestapo. They were transferred to Stalag Luft III (famous for the great escape).
Crew photo – Left to right – P/O W Kay (Pilot), Sgt H Dale (Flt Eng), Flt Sgt FH Fulsher (Nav – RCAF), Flight Officer JD Frink (Bomb Aimer – USAAF), Flt Sgt JE Sharpley (Mid-Upper Gunner), Sgt W Struck (Rear Gunner – RCAF).
John Sharpley with his family
Read more fascinating stories in our Blog Space