Seventy-seven years ago today, the 2nd of December 1943, the loss of just one Lancaster from 57 Squadron, East Kirkby, left behind eight broken families when their loved ones failed to return home.

There were mothers and fathers, brothers and sisters, a new young wife and a fiancée with her wedding dress hanging in her wardrobe and a mother with a young son and daughter and a baby yet to arrive in this war torn world. But the eight young men involved had a war to fight and had set off on yet another operation to Berlin.

The weather was against them on this particular Thursday afternoon and over 200 aircraft had already been grounded, but 57 Squadron despatched 14 crews from East Kirkby. Two didn’t return.

In one of the crews on this occasion, were two new faces. There was a young flight engineer who had only recently joined 57 Squadron and another who was on his very first trip as a second pilot to gain experience before flying with a crew of his own.

The crew of JB 529 DX-P (Peter), captained by Ernie Tansley, ran into extremely bad weather with unexpected strong winds and, like many other aircraft, was blown off target and found themselves to the south of Berlin.

They were spotted by eyewitnesses, flying low over the small town of Trebbin, possibly having already suffered from earlier damage. They were quickly attacked by a Junker 88 from nearby Juterbog airfield and there was an exchange of fire between the two aircraft. P-Peter exploded, bursting into flames with parts of the fuselage falling away along with the starboard wing and engines.

Six of the crew had either fallen or jumped from the blazing aircraft but sadly they were too low to use their parachutes. Eyewitnesses watched as Ernie, remaining in the cockpit, despite the flames emanating from the front, attempted to steer the badly damaged and burning Lancaster away from a row of houses below him. This, he just managed to achieve before it crashed into an adjacent rye field.

Although parts of the ‘plane fell into gardens and caused various amounts of damage to the houses, he had avoided any loss of life to the residents. One found twin machine guns hanging through the ceiling of her kitchen, another had the corner of their home knocked away.

Sadly, none of this brave crew survived. The rear gunner had been shot and killed earlier so was still in his turret and Ernie of course had remained in the cockpit of his beloved Lancaster. He was unable to be officially identified until after the war so was buried as ‘unknown’. 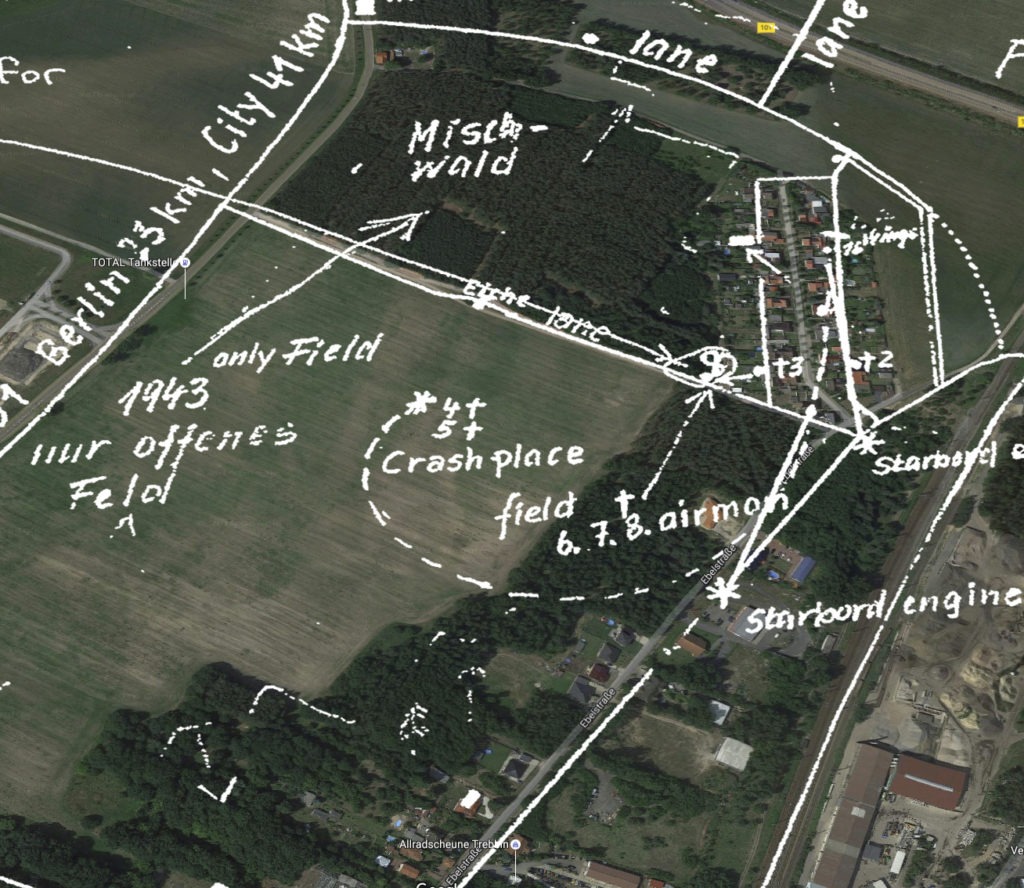 I can’t imagine what his thoughts must have been in those last moments.

These young airmen were taken to the nearby ‘Old Cemetery’ in Trebbin where they were initially buried in a communal grave after being carefully wrapped in a tarpaulin. A cross was erected to mark the spot. They were behind a tiny chapel at the far end of the churchyard and the grave was well tended by the cemetery gardener until the end of the war when they were exhumed. They were then re-buried in the Berlin War Cemetery, Charlottenburg where they now lie side by side once more.

These were the eight young men…

Sergeant Ivor Groves was the wireless operator and only 20 years old and he left behind his parents and three brothers. Two of whom were in the army, the third, like Ivor, also in the RAF. This happy, likeable young man was well thought of amongst the crew and came from a kind and loving family. They lived just outside Birmingham.

Flight Sgt, Harold Moad, rear gunner aged 23. He came from Clanwilliam in Manitoba, Canada and besides his parents, there were eight siblings, one of whom was a POW. Because this young man was unable to go home when on leave, the family of Ivor Groves welcomed him into theirs.

Pilot Officer Ernest Patrick was the bomb aimer, aged 25, from London. Besides his parents he had a young brother Alan aged fifteen who never really came to terms with the loss of his big brother.

Pilot Officer Roy Lewis, the mid-upper gunner was aged 21 and lived in the Manchester area with his parents. He was an only and much loved son. He had only recently married a lovely young girl named Moya. Sadly, they were to have only four months together. The best man at their wedding had been Douglas, the navigator.

Pilot Officer Douglas Park was the navigator, only 20 years old. He was one of six children and lived in Hull, Yorkshire. This was another very kind family and when Douglas became engaged to a young lady named Mary, they took her to their hearts. When Douglas was lost it was just days away from their marriage and Mary was left with her wedding dress hanging in her wardrobe, awaiting the big day that never arrived.

We don’t know very much about the two new faces in the crew….

Sergeant Leonard Brown was the new Flight Engineer, another young man aged only 20 years. He lived in Bermondsey, London with his parents and a younger brother, Victor. It couldn’t have been easy for him flying with a new crew for the first time.

Pilot Officer Jack Dalton was flying as a ‘second dickie’ to gain experience before taking charge of his own crew. He was 22 years old, had a sister Jean and lived with his parents in Burnley, Lancashire. Sadly, he didn’t get the chance to fly again.

The last crew member was the pilot. Pilot Officer Ernest Tansley was the eldest of the crew, aged 29. He had been sent to America to undertake his pilot training, leaving behind his wife and young family. A son Peter aged five and an eighteen-month-old daughter, Anne. They lived in Thundersley, Essex. Sadly, he didn’t live to see his other baby son who was born three months after his death.

On this day, we would also like to remember the second crew who were lost from 57 Squadron that night. They were never discovered as it is believed that they ditched over Holland in the IJsselmeer on their return journey:

F/O John Alfred Williams was the Pilot of JB372 DX-R. He was the son of David Mason and Ada Ethel Withers from Hoddesdon, Hertfordshire. Age 22

Sgt. Eric Hibbert was the Flight Engineer, and his parents were John and Frances Hibbert of Hasland, Derbyshire. He was only 20 years old.

F/O Alan Thomas Hook was an Air Gunner. He was the son of Thomas and Mabel Hook of Toronto, Ontario, Canada and had two sisters named Mabel born 1912 and Evelyn born 1915.  He was 22 years old.

F/O Bernard Paul Duval the Navigator was born in Hastings, Sussex the son of Henry Fernand and Lucienne of Upper Tooting, London.  He was 32 years old and married to Joyce.

F/S Balder Thomasberg was 21 years old and was the Bomb aimer. He was the son of George and Hilda of Norwood, Manitoba.

Sgt. Edward William Graves was the Mid-upper Gunner and the son of Norman and Esther (nee Gilbert). He was married to Brenda Townsend and a son Edward Robert was born a few months after his death. They lived in Eastbourne

Sgt. Jack Harvey Chambers was a 21-year-old Wop/AG. He was the son of Edward and Edith Chambers from Sutton-in-Ashfield, Nottinghamshire.

Your bravery and sacrifice will never be forgotten 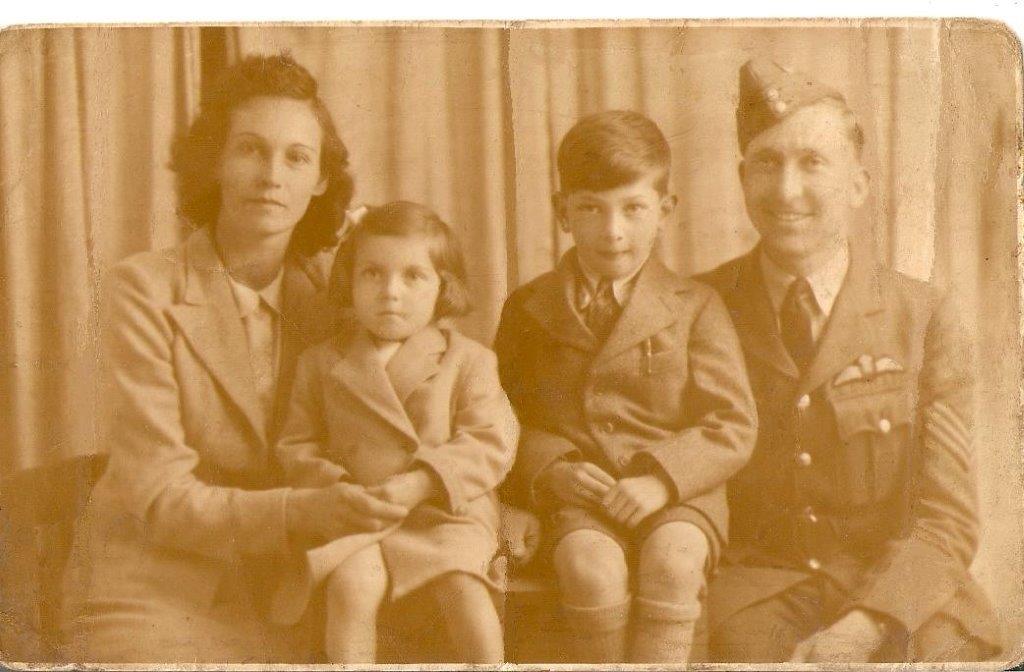 For more information on these crews please use our Losses Database

Flight Sergeant 427226 LIFE & TIMES OF NORMAN GEORGE SMITH I was born on 8th March 1924 in Perth at Nurse Stockley’s house and was delivered by Nurse Stockley. I admit to being a one-eyed West Aussie through & through. I’ve never fancied living anywhere else, even after traveling around a fair bit here and overseas. […]

by Arthur John ‘Jack’ Ball, DFC I’ve wanted to fly since I was a boy. Living under the circuits of two famous aerodromes presumably had an influence on me and I went through all the usual stages, reading magazines, building models and visiting air shows, finally joining the Royal Air Force. Many good books have […]

My great uncle served in World War Two as an Air Observer (Navigator) with 207 Squadron, 5 Group, Bomber Command, Royal Air Force (Volunteer Reserve). Eric enlisted in the RAF Volunteer Reserve on the 14th May 1940, twelve days after his 18th birthday. His first port of call was the No.1 Recruiting Centre at Penarth […]