Harold Lawson DFC was born 24th August 1921, in Salford, Manchester. His parents were Arthur, a piano teacher, and Amelia Lawson. He had two brothers Arthur and Stanley. He attended Gresham Street School, Salford and was an Altar Boy at the Church of Ascension. After school he worked for ACME welder, an engineering company before he signed up in 1941, aged 20. He signed up at the recruitment centre, Padgate. 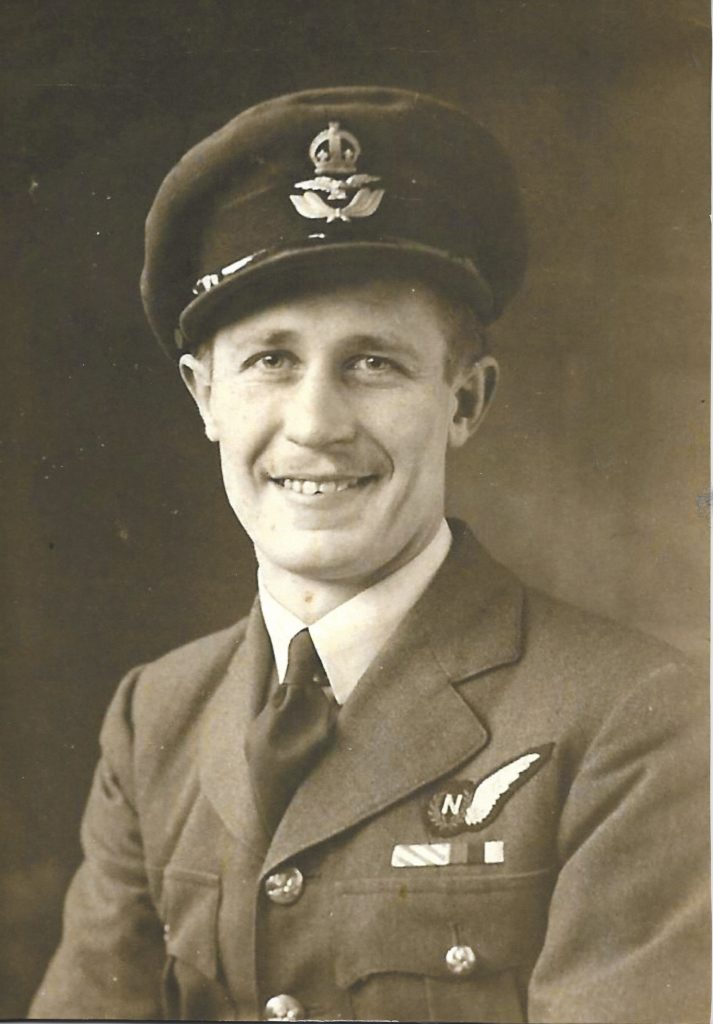 In March 1942 he was called up and travelled to St. John’s Wood, London (Lord’s Cricket Ground). Here he had all the required inoculations, was issued with his aircrew clothing, and practiced marching and keeping fit. The recruits stayed in hotels around London and their food was taken at a canteen in London Zoo.

In April he travelled to Scarborough to complete his navigational training as part of No. 10 ITU (Initial Training Unit). Many recruits were based in hotels around Scarborough including the Grand Hotel which still exists.

In July he attended the elementary flying school before moving to the Empire Air Navigation School at Sywell, in November.

In January 1943 he moved to No. 9 AFU (Advanced Flying Unit) based in Llandrog, North Wales (now Caernarfon airport). Here he started his training on Ansons. He did well to survive his training at Llandrog as there were exceptionally high losses due to the close proximity to the Snowdonia mountains. From here he moved to 19 OTU (Operational Training Unit) in Forres and Kinloss, Scotland. It was here he met up with his Canadian pilot and lifelong friend, Johnny Hewitt. Here the crew practiced cross country flying, fighter affiliation, high and low level bombing and formation flying on both Anson and Whitley aircraft.

In September 1943, the crew moved to Conversion Unit 1663 at R.A.F. Rufforth in Yorkshire. Here they transferred from Whitleys to the magnificent Halifax bomber, the plane they would complete their 38 operations on. The crew would now be joined by a flight engineer.

Finally, in October 1943 ‘Homer’ and the crew were posted to 10 Squadron at R.A.F. Melbourne in Yorkshire. 10 Squadron was also known as ‘Shiny 10’ and is still an operational squadron today. 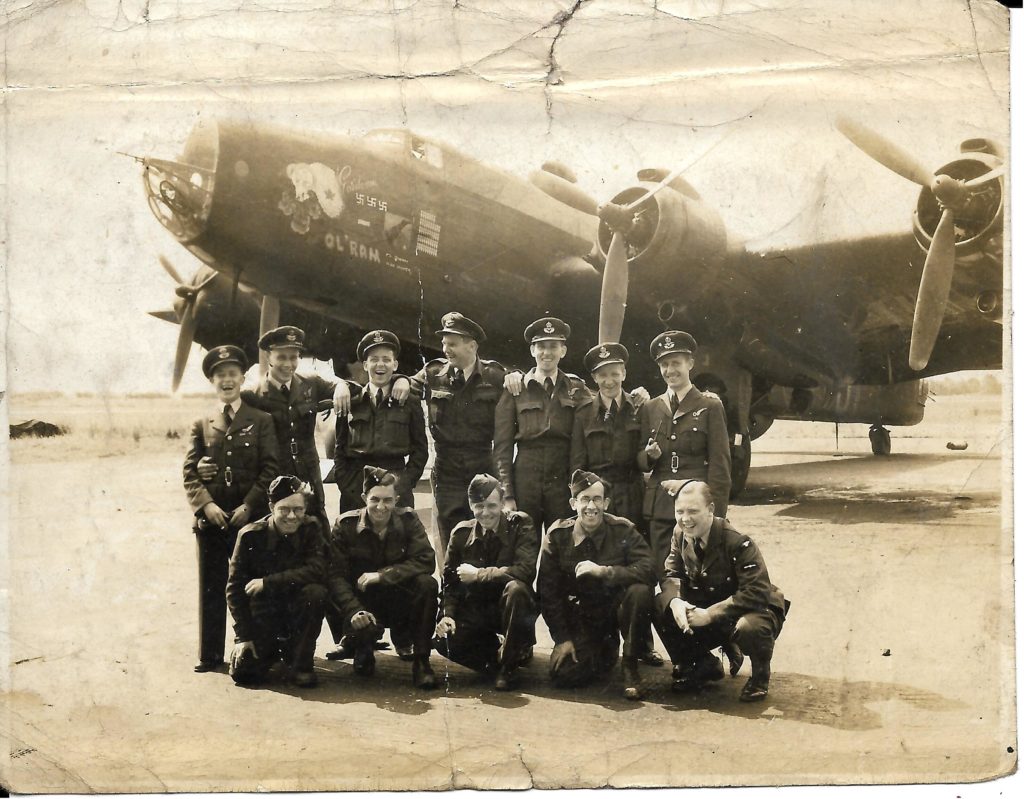 It was a baptism of fire on the crews’ 1st op. How did they feel when it was revealed that it would be ‘Berlin’? At 5.10pm on 29th December 1943 they set off to complete their 1st operation as part pf the ‘Battle for Berlin’. During this operation they encountered and shot down a JU88, returning to the airbase at Melbourne some 7 hours and 20 minutes after setting off with the plane now full of flak holes. This set the scene for their tour of operations which would be a very eventful one with several more encounters with enemy aircraft, resulting in them shooting down a further 2 German aircraft.

It was a quiet January and February before activity built up again in March with several night operations over France. The crew also started completing ‘mine laying operations’. A very difficult task as they needed to complete low level flying over the sea as they dropped the mines. And for ‘Homer’ there was the added challenge of no landmarks for the Navigator to ensure the mines were laid in the correct position. It was a task reserved for only the best crews.

April 1944 remained busy with operations over both Germany and France including Essen and Dusseldorf where the crew were caught in searchlights on both of these trips. April also saw the crew needing to make an emergency landing at one of the three emergency airfields, Manston in Kent. They had been caught in an electrical storm on their operation to Karlesruhre which caused the engine to cut out over the East coast.

May 1944 continued as an eventful month with the crew being attacked by a German fighter over Mantes-Gassicourt.

June 1944 was the busiest month for the crew with the build up to D Day, D Day itself and then the support of the ground troops as they progressed inland. On D Day they took off at 2.55am to bomb the German gun battery at Mont Fleury which overlooked Gold Beach where many troops would be landing later that day. Homer’s logbook says, “2nd Front started”. Speaking to veteran Ken Beard of 10 Squadron who had set off from Melbourne airbase only 3 minutes before the ‘Ol’ Ram’ crew said the crews were not given any details other than to ensure they didn’t drop their bombs early. When they got over the channel he could see why, as hundreds of ships were sailing across. Later that very same day the crew would be flying again. They took off at 22.30 to St. Lo to support the troops inland route, bombing at the exceptionally low level of 2000ft.

The high activity continued in June and on the 15th, on a return trip from Rennes the crew were once again in combat with the enemy. A JU88 had attacked and in the return fire the crew saw his port engine set on fire. However, the ‘Ol’ Ram’ had been damaged and the cylinder head broke making the starboard outer engine ‘US’. The events continue for the crew and on a daylight operation to Noyelle en Chausee. Homer’s logbook stating, “the starboard inner engine U/S on the way down England – carried on with the engine running to complete the op, feathered on return over Channel”. June ended with even more eventful operations and on 28th June on the trip to Blaineville the crew were in 3 combats resulting in the shooting down of a Messerschmitt 210. The logbook states the Messerschmitt ‘hit the deck 3 minutes after the starboard wing set on fire’.

July 1944 moved to the next phase with the bombing of the new threat of the V bomb bases. The crew carried out 2 night and 1 day operation to the V bomb site at Martin L’Hortier. The flak encountered was very heavy and the Ol’ Ram returned with flak holes in the tail. It is known that during these operations 1 crew was lost having been shot down and another was accidentally hit by bombs that had been dropped by a bomber flying at a higher level. Another emergency landing away from the base happened on 12th July as the weather changed on the way back from a mining trip to Heligoland meaning the crew could not make it back to Melbourne. More heavy flak was encountered on the operation to Vaires railyards. The 20th July was the last of the crews’ operations and one not to forget. The operation was to Blottrop. The plane had a petrol leak on the port inner, then the port outer went ‘US’ followed by the ammo tracks catching fire – a very eventful last trip.

Harold ‘Homer’ Lawson was awarded the D.F.C. in November 1944. The press article reads “Gallantry and devotion to duty in air operations. Throughout an exacting tour of duty this officer has displayed exceptional ability as a Navigator and cool courage in the face of the enemy. On four occasions his aircraft has been engaged by enemy fighters and in the ensuing air combat three hostile aircraft have been destroyed”.

After the tour he went back to Forres where he trained new navigators on Wellington bombers and Ansons before moving to R.A.F. Rufforth conversion unit.

In May 1945 he transferred to 77 Squadron at Full Sutton with a new pilot (Pickin) and crew. They were flying Halifax Mk6’s and then Dakotas. The crew were preparing to fly to the Far East to support the Burma campaign. During their time here they were also heavily involved in jettisoning bombs into the North Sea as the war in Europe ended.

In September 1945, the crew moved to R.A.F. Broadwell to practice supply dropping and glider towing before setting off on 22nd September en route to India.

October 1945 the crew completed supply dropping and troop repatriation around India and the Khyber Pass. Homer was demobbed in 1946.

After the war he returned to his old employers and worked in engineering most of his life. He met his wife Maureen Chilton at a dance at Belle Vue, Manchester and they eloped to get married New Year’s Eve, 1955. Unfortunately, Homer died 12th September 1975 of a heart attack.

Completed from the logbook and service history by his daughter, Susanne Pescott.

To order a Ribbon of Remembrance Stone please click here

Find out more about the Stories of the Stones here