Having the privilege of working in the Garton Archive at Lincoln Christ’s Hospital School, I regularly receive surprises concerning the School’s rich heritage. A recent one has been the revelation that one of the nation’s heroes from the Dambusters raid was an Old Lincolnian by the name of Edward Cuthbert Johnson DFC. Inevitably he carried the soubriquet ‘Johnny’, and is therefore the second Lincoln School legend to bear that nickname, the other being the long-serving and much-loved and respected English master, ‘Johnny’ Philips.

I am indebted to Richard Lascelles, who attended Lincoln School from 1958-63, for drawing my attention to the fact that ‘Johnny’ Johnson was an integral part of the famous  raid.

Edward owed his second name to his mother Jessie, whose maiden name was Cuthbert, and who was born and raised in Gainsborough. The family also had connections with Washingborough, where Edward was baptized.

Edward was a Cathedral chorister during his time at Lincoln School, and left in April 1931 to take up an apprenticeship at the Lincolnshire Chronicle Printing Works. Interestingly, he would have been a pupil at Lincoln School at the same time as Alex Henshaw, the Spitfire test pilot, who was the subject of another recent article in the Second World War series from the Garton Archive. 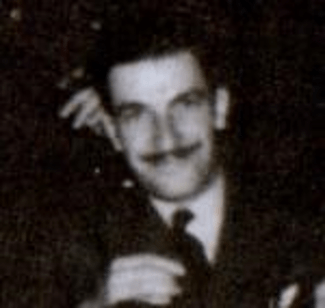 The 2002 edition of the Old Christ’s Hospital Lincolnians Newsletter made reference to the Daily Telegraph obituary, which stated that Flying Officer Edward Johnson deservedly merited the DFC after the spectacular success of his role as bomb-aimer with Guy Gibson’s 617 Squadron on the night of the 15th/16th August 1943, when at the third attempt he was responsible for releasing one of Barnes Wallis’s bouncing bombs. The resultant devastating breach of the Eder Dam unleashed more than 300 million tons of water into the valley below. Earlier on that night, the Squadron had taken off from its RAF Scampton base at 9.55 pm. It is a sobering thought that eight of the nineteen Lancasters which left Scampton on that night failed to return.

Johnson, at 31 the ‘old man of the raid’, claimed that his own ‘Johnson sight’, a drawing of the Moehne Dam’s twin towers on the large circular window of his aircraft compartment, greatly assisted him in choosing the right split-second for his aim at the Eder Dam.  The device was described in the Daily Telegraph obituary as a primitive, if clearly effective, apparatus.

The following vivid and more detailed account of the Dams raid has been transcribed from the Dambusters Blog (www.dambustersblog.com).

There were two bomb aimers called Johnson on the Dams Raid, something that occasionally causes confusion. A third bomb aimer was called Johnston. In the inevitable way of things in the wartime RAF, both Johnsons were also known to their friends and colleagues as ‘Johnny’. The older of the two was Edward Cuthbert Johnson, bomb aimer in Les Knight’s crew, who was born in Lincoln on 3 May 1912. When his father was killed on the Western Front in 1914, he and his mother moved to Gainsborough, although he was educated at Lincoln Grammar School.

On leaving school, he worked for Woolworths and then the catering firm, Lyons, and then in a boarding house business in Blackpool with his wife’s family.
He joined the RAF in 1940, qualified as an observer/bomb aimer in early 1942, and was commissioned. After further training he was posted briefly to 106 Squadron, but then sent back to a training unit to be crewed up with Les Knight and his colleagues. They moved to 50 Squadron in September 1942, and Johnson flew on some 22 operations with the Knight crew.

Johnson and Hobday were the elder statesmen of the Knight crew, both nine years older than their skipper, and senior to him in rank. But they worked well as a team, each obviously seeing in the younger man what an outstanding pilot he was. All three were decorated for their role in the Dams Raid, Knight getting the DSO and Johnson and Hobday the DFC, and were photographed together outside Buckingham Palace on the day of the investiture.

In September, on the fateful Dortmund Ems operation Johnson jumped from the stricken Lancaster when ordered to by Knight. He yelled: ‘Cheerio boys. Best of luck. See you in London.’ He recalled later: ‘The farewells were a little hasty but lacked nothing in sincerity for that.’

Like four of his colleagues, Johnson successfully evaded capture and reached the safety of Spain, with the help of a friendly Dutch farmer and policeman, and various members of the resistance in Holland, Belgium and France. He returned to the UK, via Gibraltar. He served out the rest of the war in various ground postings, and left the RAF in 1947. He went back to Blackpool, and joined a company selling fireplaces, where he worked until his retirement.

Richard Lascelles has also recommended The Dambusters’ Raid, by John Sweetman, for an authoritative description of the raid.

The next important mission in which Johnson took part was the attack on the heavily-defended Dortmund Ems canal, used at the time for moving prefabricated U-boats to the sea from the Ruhr factories. The Daily Telegraph reported that Knight took off from Coningsby on 15th September 1943, to which 617 Squadron had moved because of the advantage of its longer bitumen runway compared to Scampton’s grass surface. That was an important consideration given the weight of Wallis’s latest 10-ton bomb.

Johnson was in the nose viewing the target area in poor visibility, when he was horrified to catch sight of some trees ahead, higher than the aircraft. He yelled, “Up, up, for God’s sake,” but although Knight reacted swiftly Johnson recalled a horrible crunching sound, as they swept through the air at 250 mph. The Telegraph article described that fateful scene as follows:

The situation was dire, with furious flak and fire in two port engines, as Knight, hoping to make it home, coaxed the Lancaster to some 350 metres. Johnson had already jettisoned the huge bomb to gain more height and was throwing out guns and all heavy gear to lighten the load.

The bomber had reached the Dutch border when Knight, realising it was impossible to go on, ordered the crew to bale out.

He remained at the controls until his crew of six others had jumped but the skipper had left it too late and went down with the burning bomber.

Johnson buried his parachute and walked until dawn before settling into the top of a haystack in a farmyard and sustaining himself with ‘escape kit’, condensed milk and chocolate. In the morning he removed all RAF uniform insignia and called on the farmer, whose family produced hot food.

The farmer equipped him with overalls and shaving gear and Johnson set off on a trek which was to take him through Holland, Belgium, France and Spain, before reaching home from Gibraltar.

In Holland, Johnson was helped on his way by a village policeman, who provided a suit, and members of the underground, who couriered him to Belgium and on to France. There he was sheltered in a Paris flat by a woman trading in black-market food.

Travelling on in a succession of trains Johnson neared the Pyrenees and cycled until, reaching the hills, he was guided by a smuggler into Spain, where he was picked up by a British embassy car and driven to Madrid.

After the war, Johnson re-joined his wife May (née Beckwith), who had moved from Leeds to Blackpool, where he became Sales Manager, and later Director of Sellers Fireplaces, which imported marble from Italy to market the popular line of fireplaces. They were married in 1936.

Edward Johnson died in Blackpool on 1st October 2002, aged 90.The Daily Telegraph obituary informed readers that he was survived by his son.

From the Garton Archive: Item of Interest 52 Compiled by Peter Harrod

I am indebted to Ian Beckwith, a friend and former colleague at Bishop Grosseteste University, who kindly provided me with background information on Edward Johnson’s family.