As well as being a Volunteer Tour Guide at the IBCC, I’m also a member of the 44(Rhodesia) Sqn Association.  I flew on 44 (R) Sqn from 77 to 82, during the Vulcan era, and became an Association member as it was formed when the Sqn was disbanded in the mid-80’s.  It was through this connection that I became involved in the 75th Anniversary commemoration of the crash of Lancaster ME442 of 44 (R) Sqn at Brocklesby on 4 March 1945.

44 (R) Sqn Association was contacted some months ago by Garry Mahon, who is a nephew of Fg Off John “Jack” Ryan, the RAAF Captain of the ME442 on that fateful day in 1945.  Garry was attempting to organise a 75th Anniversary commemoration, to mirror the 50th Anniversary commemoration in 1995, and sought the Association’s help.  With the Association’s Chairman – Gp Capt (Retd) John Laycock and Secretary – Sqn Ldr Henry Horscoft’s help, Garry made contact with Lord Yarborough’s Brocklesby Estate Office and Flt Lt Terry Marsden RAFVR (Retd), the local RAFA representative at Kirmington.  With Lord Yarborough’s kind permission (as the woods are not normally open to the public at this time of year), Flt Lt Marsden’s terrific support and everyone involved pulling together, the event was organised for Wednesday 4th March at 11:00 at the crash site Memorial located in Brocklesby Mausoleum Woods.  At this point, as neither John Laycock or Henry Horscroft could attend the memorial service in the woods, due to ill health and the rough terrain in the woods, I was asked if I would represent the Association and was only then told I would have to make the introduction on the day! However, with Peter Jones support from the IBCC digital archive, writing the introduction became an easy task.

There was 8 of Fg Off Jack Ryan’s relatives in Garry Mahon’s party travelling from Australia and they also wanted to visit the IBCC during their visit to the UK, so I arranged to host them at the IBCC on Tues 3rd March.  They were all very impressed with the Centre and felt it was a very fitting tribute and memorial to all of the Bomber Command men and women who lost their lives.

So to the event itself on the 4th March.  It started in the car park in Great Limber village at 10:00, following an early morning drive over the Lincolnshire Wolds.  We were transported to the Memorial site, via a rough woodland track, in what can only be described as an agricultural trailer with seats down the sides, pulled by a 4-wheel drive.  Luckily the crash site Memorial, deep in Brocklesby Woods, was bathed in warm early Spring sunshine.   There were probably about 50 people at the commemoration as, in addition to the 8 Australians, there were also many family representatives from 5 of the 6 RAFVR crew members of the crashed Lancaster, who had made the journey from all over the UK to be there.  The RAF and RAAF also sent representatives, Barry Wallis represented the IBCC and the Earl of Yarborough also attended.  Following my introduction, the Act of Remembrance was led by Rev Lee Gabel and Flt Lt Terry Marsden RAFVR (Retd) and included prayers, exhortation by Garry Mahon, the Last Post, 2 minutes silence and Reveille followed by laying of crosses by the relatives of the crew members and the other organisations present.  The commemoration ran exactly as planned and everyone, including Lord Yarborough, were very moved, and said it was a fitting tribute to brave crew who lost their lives at Brocklesby Woods 75 years ago.

Following the Memorial Service, we all met up at the Marrowbone & Cleaver pub (the one owned by Guy Martin) in Kirmington for lunch, which gave us all an opportunity socialise with all the families of the crew.  Overall it was a lovely day which both my wife and I will long remember.  A list of the crew members of ME442 and copy of my introduction are printed below.  Also attached are pictures of the commemoration at the crash site and some pictures of the Australian visit to the IBCC on the 3rd March 20:

The Crew of Avro Lancaster ME442 – click on the names to see more information on each man from the IBCC Losses Database:

For other stories and news see our Blog Space here

We are gathered here today to commemorate the lives, bravery and camaraderie of the seven 44 (Rhodesia) Squadron aircrew who flew Lancaster ME442, which crashed here 75 years ago today, in the early hours of the 4th March 1945.

At 18:42 on the evening of the 3rd March 1945 – the 2,000th night of the Second World War – their Mk 3 Avro Lancaster, coded KM-V, took off from RAF Spilsby, under the command of Flying Officer Jack Ryan of the Royal Australian Air Force, along with his six Royal Air Force Volunteer Reserve crew.  They joined a raid consisting of 212 Lancasters and 10 Mosquitoes of 5 Group, to attack the Ladbergen aqueducts, part of the Dortmund – Ems canal.  The raid was successful, over 100 metres of canal bank was destroyed and both aqueducts were in ruins, putting the canal completely out of action for the rest of the war.

As they returned to their Lincolnshire air base, Flying Officer Ryan’s aircraft was intercepted by a Junkers 88C night fighter.  This was the first night of the Luftwaffe’s Operation GISELA, a new tactic by the Germans, whereby instead of attacking our bombers on their outward run, they targeted them as they returned home.  Approximately 200 German night fighters prowled the night skies over England, lying in wait for the returning bombers, attacking either as they landed or were circling in readiness to land.

Sadly, Flying Officer Ryan’s aircraft was shot down by the night fighter and crashed in flames at approximately 1AM in the morning on the 4th March 1945, tragically killing all seven crew members as it came to rest against this tree.

On behalf of 44(Rhodesia) Sqn Association, and all those who have served on the Squadron over the last 75 years, we salute this crew’s bravery, dedication to duty and ultimate sacrifice.  We will always remember them. 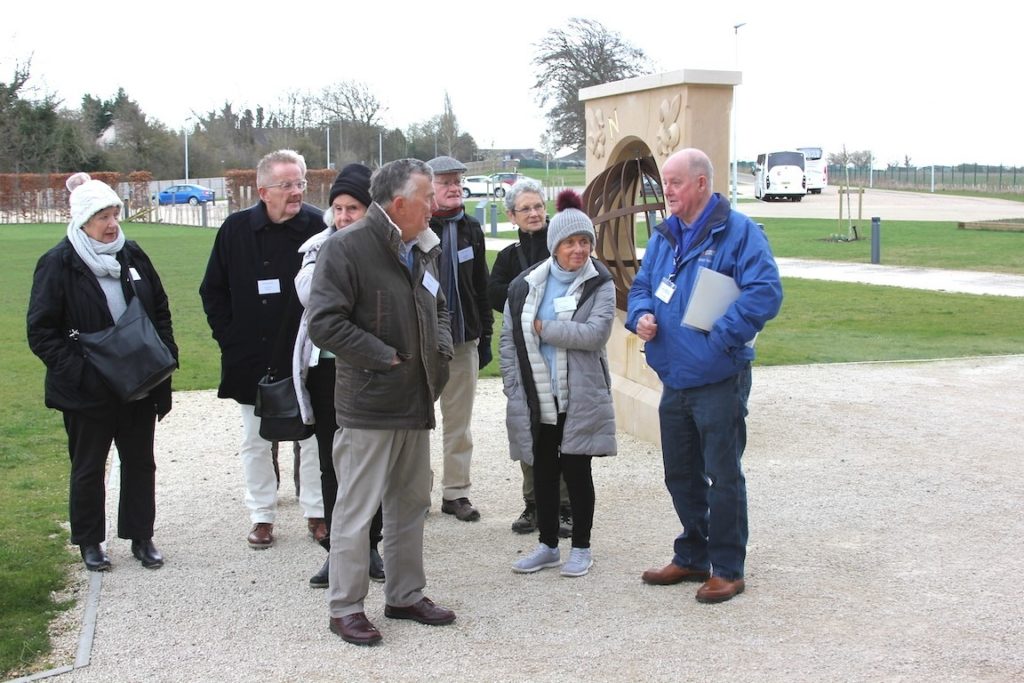