Mostly the same crew members as on the night of the accident although at the time training on a Wellington at RAF Hixon in Staffordshire in February 1944. The Canadian pilot P/O Stuart is on the left, our Father Sgt P Dunn, is on the right.

One story my Dad used to tell me is of one very lucky escape they all had whilst taking off for a mission in the early hours of July 18th 1944. 100 Sqd were tasked with bombing a strong point in the battle area near Sannerville. It was only five or six weeks after the D-Day landings and the German army were still resisting strongly so the allies were using air power wherever they could to try and weaken the German defences.

Dad and his crew were allocated a Lancaster 111, LM 643, HW-H. They started their take off run at 03.56 but nearing take off speed the aircraft swung out of control , crashed and soon after, exploded. Fortunately the crew managed to get well clear of the wreckage ahead of the detonation. 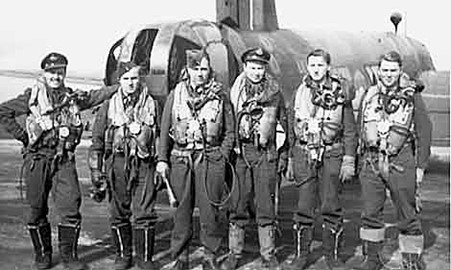 That night 18th /19th July 100 Sqn lost 2 more aircraft over Scholven-Buer (oil plant) LM 569 HW-T and LM 620 HW-K. Both were crippled by Flak and crashed killing all the crew members on both aircraft. All the crew now rest in the Reichswald Forest War Cemetery.

Dad survived 30 missions on that tour and was posted to the far East and Australia with 238 Sqn where he served to the end of the war, in fact his last mission was on 26/02/46 on Dakota KN605 from Darwin to Camden in Australia.

He died happily a few years ago in his late 80s in his beloved Australia!