On his return to Stanton Harcourt, Gunner B was rushed to hospital at Radcliffe Infirmary in Oxford, then onto the RAF hospital in Halton.

He had already lost a lot of blood when his crew discovered him slumped and unconscious in his turret.

Him and the mid upper gunner would have been feverishly, yelling instructions at each other over the intercom, directing each other towards German fighters that would be hurtling in from different angles. German flack shells were bursting all around them, leaving a heavy stink of cordite in their turrets. It is reported that they had taken on a couple of German Messerschmitt 109 fighters and shot one down. There were 31 German fighters waiting for them in La Rochelle that day. These fighters attacked our aircraft relentlessly and with hardened determination, on the run up to the bomb drop. They were trying to protect Germany’s most valuable and dangerous naval asset. I can just imagine Gunner B roaring and spitting all sorts of profanities as he fired back with his four 303 Brownings. He really was that sort of man, fearless and determined also. The noise from his guns, the constant drone and vibrations from the 4 Merlins, Flack bursting all around them and fighter bullets raking their fuselage must have been horrendous. It is little wonder that his hearing was impaired later on in life.

Unfortunately, German fighters managed to hit the target and put two bullets clean through Gunner B’s plexi-glass turret and right through his left shoulder. A few inches lower and it would have been his chest….No hope.

The flight home must have taken around 3 hours or so. That’s a hellish long time to be up there with his shoulder almost blown off and his life’s blood draining out of him. I would expect his crew would have dragged him farther back into the aircraft to administer first aid and plug the bleeding wounds, both front and back. Whether or not he was given morphine by his crew is unclear, but I sincerely hope that that was the case.

The next day, on the 25th of July, his wife Nell received a telegraph from the RAF telling her that her husband had been shot in action and had shoulder wounds, but not critical. Later that day, she got another telegraph, this time from Gunner B himself, telling her, ‘not to worry, it’s only a scratch’.   He must have been in terrible pain when he organised this telegraph, but he would’ve known the RAF would already have informed her and she’d be frantic with worry. 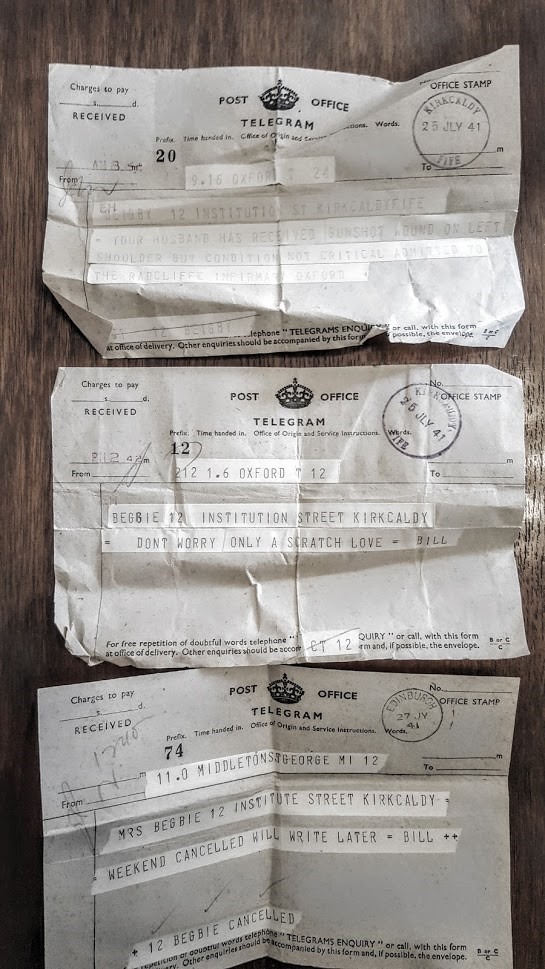 Gunner B was later transferred again, to the Queen Victoria Hospital in East Grinstead on the 1st of December.

This would be where he came under the specialist care of the famous and pioneering, plastic surgeon, Archibald McIndoe, who had been appointed Consultant in Plastic Surgery to the RAF.

Gunner B, I believe, became one of the 1st hundred men to receive the pioneering plastic surgery during WW11.  For this he received the Flying Guinea Pig Badge

I am pleased to say at this point, that this badge along with Gunner B’s Fur collar, complete with his dried blood and bullet holes is in the safe hands of his Grandson, retired RAF Warrant Officer, John Brough. The son of Helen (Begbie) Brough. John, and now two of his sons, David Brough and Jake Brough have followed in their great grandfather’s footsteps. David and Jake are both Senior Aircraftsmen in the RAF and who knows where they can go from there. (Per Ardua Ad Astra).

The collar shown in the picture, complete with his dried blood and bullet holes, buttoned on to Gunner B’s leather flying jacket. I remember, as a young lad, slipping my index finger through a bullet hole. A German bullet from an ME109 fighter and was surprised at how small it was. I also remember studying the actual bullets, there were two. One was a bit bent and the other was straight. I looked at Gunner B with some confusion in my eyes. He grinned as he told me that his crew had dug the bullets out of the backrest of his seat in the bullet ridden turret. They later presented them to him in his hospital bed. They had taken them to a local jeweller first and that’s why I saw his name etched upon the straight one…….. W Begbie. 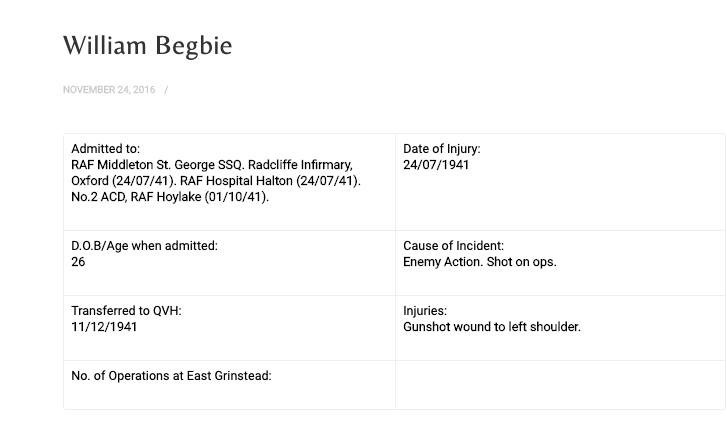 Upon leaving the RAF, Gunner B came home to Kirkcaldy to re-join his wife, Nell and his baby girl Helen, named after her mother. Her Sister, Patricia (Trish) came along a little later and me a few years later still. He went on to have successful career as a Chief Engineer with the National Coal Board (Aye, doon the pits), Alexander’s Bus Garage, and finally Thomas Nicol Salvage in Kirkcaldy.

During his time at Thomas Nicol he worked as an engineer on a salvage vessel that the firm had bought, in order to salvage German warships that had been scuttled by their own commanders at Scapa Flow in 1918.  How ironic that in the very early 1970’s he was involved in raising German warships, when in 1941 he was trying to sink them.

Flight Sergeant William Begbie died in 1974 aged 59. He had been troubled with blood clotting and heart problems since the death of his beloved wife, Nell.

It is with a heavy heart that I conclude this story with this thought.

The respect I have for this man and all his comrades who fought for this country, goes beyond the realms of respect, pride and sincerity.

I would once again, like to take this opportunity to thank my wonderful sister, Pat (Begbie) Croll, for taking care of the family pictures and Gunner B’s medals, badges,etc.