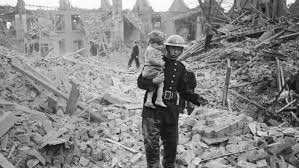 “It was Hitler’s belief that the war from the air would terrorise London into defeat. He was wrong. The city’s inhabitants on the contrary; took a perverse and particular pleasure from being the frontline of the war: ‘We can take it’ became the catchphrase of the blitz.”

7 September 1940 was a warm late summer’s afternoon that saw the end of the wartime life that people had become accustomed to.

At 4pm, German bombers flying in a formation that was 20 miles wide, crossed the English Channel. Their approach was plotted by Fighter Command at Bentley Priory and the fighters were scrambled to meet the enemy. It was the middle of the Battle of Britain, but this time the Luftwaffe turned away from the airfields and headed towards to London. It was to become the first night of the Blitz.

After months of watching dogfights over their city, Londoners came out onto the streets at the sound of the engines of the approaching aircraft. Many watched in disbelief and listened as the first air raid siren sounded. There had been warnings before, but this time the bombers had appeared. 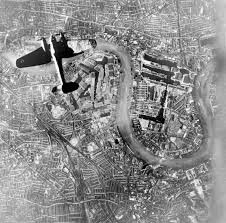 348 German bombers came in the first wave following the River Thames towards the ‘U-shaped’ bend that marked their target.  The docks were London’s economic lifeblood and were surrounded by the heavily populated East End. People watched as the bombs fell on the docks and the surrounding industries. Soon the sky turned orange and began to fill with thick black smoke blotting out the day.

Soon the docks were alight with 200 acres of timber burning out of control at Surrey Docks. 1000 pumps were brought in from as far away as Birmingham, Bristol and Brighton. Sadly 20 firefighters, known as ‘Heroes with grimy faces’ were killed in the firestorm that erupted.

Just after 6pm, the all-clear was sounded and people emerged from the shelters to a scene of destruction with fires still raging. But it was the lull before the storm, as the sirens sounded again two hours later, and the second wave of bombers approached led on by the fires from the first attack

300 bombers dropped high explosives and incendiary devices onto the already devastated East End and docks. During this time, Fighter Command shot down 60 German aircraft with the loss of 30 fighters and 15 pilots.  Many of them had flown multiple operations on this day and were exhausted by the size of the attacks.  The Luftwaffe was able to bomb with a sense of freedom.

To people in the shelters, hiding under the bridges, down the underground or in an Anderson shelter in their back garden the night must have seemed terrifying and never-ending. London had seemed safe until this night.

1000 people were sheltering in Columbia Road, Bethnal Green, east London when a bomb went straight down the air shaft and exploded killing 40 people. The Keeton Road School in Bermondsey was struck killing 38 people – half of whom were children. Whole families were lost.

Buildings collapsed. Windows shattered, exploding as the skyline lit up as bright as the sunrise that was still hours away. The noise was deafening. Dust filled people’s eyes and nose making sight hard and breathing difficult. The terror of the Blitz had begun.

By 4.30am the all-clear finally sounded and there was a silence as the population began to emerge from their hiding places shocked to find their city devastated and knowing that this night wouldn’t be the last.

430 people had been killed, and nine fires were still burning. The sky glowed in the aftermath visible up to ten miles away.

The bombing of London was a massive turning point in the war. The Luftwaffe and the German leaders wanted to bomb Britain into submission.

“From the flames rose a defiance and determination not to bow before the enemy – which helped Britain win the war.”

In turning their aircraft away from the fighters and their airfields, Germany gave Britain the space, time and opportunity to rebuild the RAF, and thus began to turn the tables.

By the end of September, 5300 tonnes of high explosives had been dropped and a third of the capital lay in ruins.

The Blitz saw London bombed every night and day (except one) for eleven weeks. Other cities felt the force of the Luftwaffe bombers including Coventry. On the 14 November 1940, it saw the biggest raid resulting in 4330 houses being destroyed, 200 fires and 554 people being killed.

The last night of the Blitz was 10-11 May 1941, but it was also the worse. The whole of London was in the German bombers sights as they used the river and the full moon to find their targets including the House of Commons and Westminster Abbey both of which were badly damaged. It was one of the most destructive raids but still the city was still standing and defiant.

The raid lasted seven hours from 10pm through to the all-clear at 5.50am. The raid was the last major raid of the Blitz and saw the highest number of casualties with 1436 Londoners killed.

For now, the worst of the raids were over as Germany turned its forces east towards Russia and the beginning of Operation Barbarossa. Few who were there and survived would forget the 244 days and nights that saw their city defy the odds and rise again.

For other blogs look at our Blog Space here