Take to Lincolnshire’s ‘big skies’ and experience the thrill and excitement of aviation – past and present. Discover a landscape criss-crossed by wartime airfields and reminders of Lincolnshire’s historic aviation role – and home to the famous Red Arrows and Battle of Britain Memorial Flight display teams.

Whether you’re an enthusiast or simply looking for a great family day out, Lincolnshire has something to suit. See two of only four Lancaster bombers left in Britain. View the elegant buildings of the world’s oldest military air academy at RAF Cranwell.

During the Great War Lincolnshire’s 37 airfields housed fighters targeting Zeppelins. They were also the locations for training aircraft and airships, whilst Lincoln was one of Britain’s largest aircraft production centres.

The RAF was formed in 1918 from the Royal Naval Air Service and the Royal Flying Corps and after the war there were only three active airfields left in Lincolnshire. At Cranwell’s Royal Air Force College, formed in 1920, Frank Whittle proposed the basis of the jet engine. T E Lawrence (Lawrence of Arabia) also served there.

By 1945 there were 49 airfields, more than any other county. Pilot poet John Magee flew Spitfires with the Royal Canadian Air Force and is buried at Scopwick. Almost 500 air force memorials mark the sacrifice of young men and women of many nations.

During the Great War US Navy flying boats flew anti-submarine patrols from the county and in the 1940’s fighter pilots were trained here. C-47 transports carried D-Day paratroops and B-29 strategic bombers were also based in the county. The 3 Eagle Squadrons were all based at Kirton in Lindsey during WWII.

Britain’s nuclear deterrent was maintained by the RAF’s V-Force in the 1950’s and 1960’s, with Scampton and Waddington operating the mighty Vulcan bomber and the Lightning interceptors flew from Binbrook. 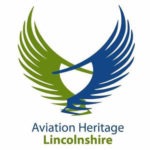